EV Carsharing on the move

Forth and Mobility Development Group are creating a national partnership to launch the Affordable Mobility Platform (AMP), which will establish electric vehicle (EV) carsharing based at affordable housing sites in at least five states over the next two years.

In November 2021, Forth was awarded two grants from the US Department of Energy (DOE) as part of the Low Greenhouse Gas (GHG) funding opportunity for the creation of solutions that reduce vehicle emissions and accelerate the expansion of EV infrastructure and charging (DE-FOA-0002475, earlier post). The national programs funded include Forth’s Affordable Mobility Platform (AMP) and the Leadership of Employers for Electrification Program (LEEP).

This carsharing model as it will roll out builds upon the success of the Miocar program in California’s San Joaquin Valley (supported by Mobility Development), as well as Forth’s experience of piloting similar programs in rural Oregon—both efforts received proof of concept funding from DOE in 2019.

These programs make it possible for people to drive EVs without having to own one, and are based in rural and urban locations where having access to a car can be critical to economic independence.

The AMP program will concentrate on communities that have early interest in collaboration from local affordable housing developers, utilities and clean energy advocates, based in part on Forth’s work advancing this concept nationally through the Bloomberg American Climate Communities Challenge.

The first states included in the program are: Oregon, Washington State, North Carolina, Missouri and Michigan. Mobility Development and Forth will seek to grow the program beyond these initial states as the federal government ramps up climate investments through the Justice40 initiative, and as other stakeholders work to accelerate the transition to electric mobility.

Increasing equitable access to electric cars and charging is central to Forth’s mission. By combining our experience in developing successful national programs on EV outreach, education and access with Mobility Development’s experience with community EV carsharing, our partnership creates an opportunity to build an impactful, affordable and lasting program model. Together, we are working to ensure that those who are often hit first and worst by emissions-based pollution are also included in and involved with new technological advances addressing these issues, while also providing greater access to personal transportation options.

—Jeff Allen, Executive Director of Forth

This partnership allows us to create meaningful impact on a national scale. Our EV carsharing operational experience and background working in marginalized communities, combined with Forth’s deep national network and impressive understanding of federal and state clean energy policy, will allow us to work more dynamically with communities throughout the US.

The Affordable Mobility Platform also reflects a larger alignment underway between Forth and Mobility Development. In 2021 the two nonprofits began actively discussing how to combine their expertise to accomplish common goals around equitable transportation more effectively. To solidify their commitment, Mobility Development and Forth recently signed a formal memorandum of understanding, which maps out how the two groups will collaborate to “advance and accelerate the adoption of EV carsharing in low-income, underserved communities.”

These programs launching through the AMP initiative in 2022 and 2023 will demonstrate how Forth and Mobility Development plan to complement one another in their joint work. Knowledge-sharing between the nonprofits is a core principle laid out in their new partnership, ranging from respective best practices to use-cases that will help guide continuous improvement in their services. The partners seek to drive down the cost of providing nonprofit carsharing services through:

As you can see I've been away from my blog for quite a while.  Retirement is great.  Please indulge me while I share a bit of history about the early days of carsharing — the birth of my start up company, CarSharing Portland Inc., in 1998; and the launch of Flexcar and Zipcar two years later.  It's here in the first installment of a history of carsharing by Tyler Phillipi. 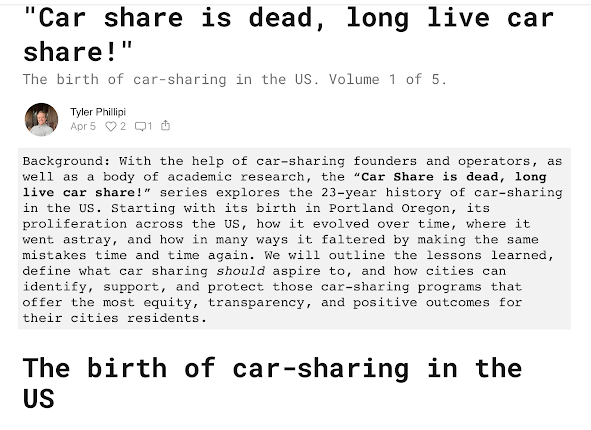 Carsharing Papers at the 2019 Transportation Research Board Meeting

Carsharing has come a long way since the 1990s.  This year there don't appear to be any presentations about carsharing, although a number of papers about one-way, round trip were accepted for publication. (see the end for how to read the full papers.)

Several of the papers deal with providing incentives for carsharing users to achieve various goals, for example relocation, increase utilization.  Here are several that look interesting and a section of the abstract that caught my eye.

...The objective of this study is to establish FFCS customers’ preferences for each of four incentivisation mechanisms: 1) vehicle delivery, 2) paid relocation, and 3-4) incentivisation for alternate vehicle pick-up and drop-off locations. Survey data from FFCS users in Vancouver and Washington D.C. are employed to quantify willingness-to-pay/accept (WTP/WTA) for these mechanisms. We find that a majority of respondents report positive attitudes toward each of the four incentivisation mechanisms. Regression analysis shows that user experiences using FFCS are generally stronger predictors of WTP/WTA than socio-demographic features, with (intuitively) the frequency of FFCS unavailability the strongest predictor.

...The reward policy and the ranking method were tested in real operating environment of an electric vehicle sharing system in two districts of Shanghai. The result suggests that the reward policy with ranking method could shorten the vehicle idle time and increase the number of transactions per vehicle and per station, and also resulted in increments on profits.

All the sessions involving carsharing and shared mobility are listed ere:
https://annualmeeting.mytrb.org/interactiveprogram/Details/11617

To read the papers, you can go to an academic library and get a copy, or become a member of TRB, or pay TRB to access each paper separately.  TRB.org 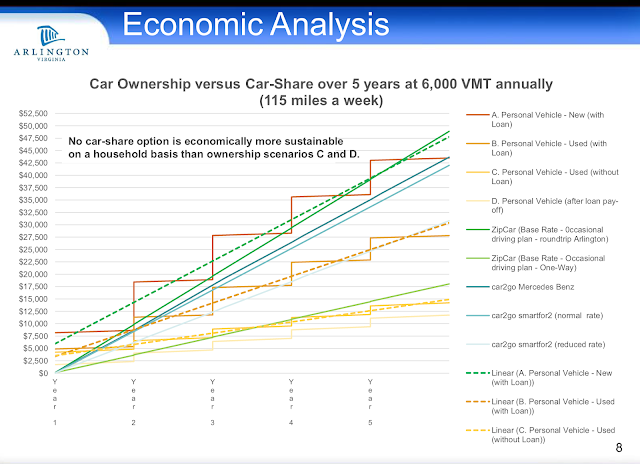 This is a short chronology of CarSharing Portland and the start of carsharing in the US, based on announcements in CSP member newsletters and other documents.

Pre 1996
1985 - Russell Martin works for the Short Term Auto Rental (STAR) project, an UMTA funded
demonstration program at Park Merced housing complex in San Francisco
1994 - Benoit Robert starts nonprofit carshare in Quebec City which became CommunAuto in
1995, a for profit company based in Montreal, Quebec, Canada
Rain Magazine (Eugene) publishes extended interview with Carsten Petersen and
Markus Petersen, founders of StattAuto Berlin; another article describes the
formation of the Eugene Carshare Cooperative (which apparently only had 1 old VW Beetle);  these articles had significant influence on Dave Brook.
Various articles appear in US newspapers about carsharing in Europe during the decade.

Scenes from the 20th Anniversary of Carsharing in the US Party

Many of the founders and supporters of the first commercial carsharing company in the US - CarSharing Portland Inc. - celebrated the 20th anniversary of its launch at the Lucky Lab Brewpub on
April 2nd.  Carsharing has come a long way since then.

I'll be posting a timeline of CarSharing Portland (CSP) soon and am planning a series of posts describing the founding and activities of CSP.  To get notified when they appear, subscribe to this blog (link in the righthand column). 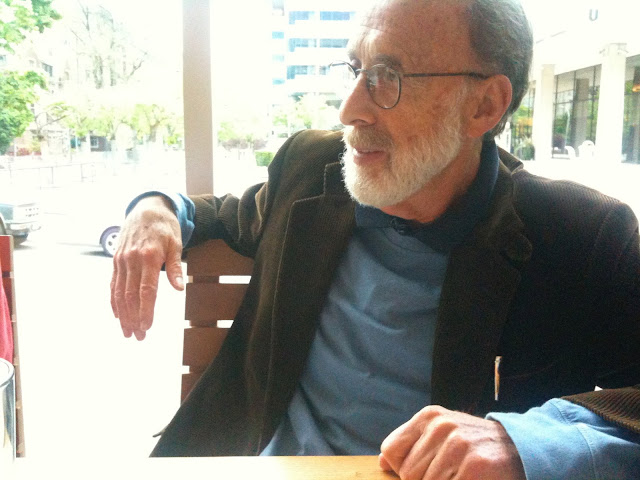 Not able to attend the party but mentioned by many was Dr. Richard Katzev, Reed College psychology professor at the time, who inspired us and conducted the first independing evaluation documenting the benefits of carsharing to US cities.

March 28, 1998 was the launch date of Carsharing Portland, the first commercial carsharing company in the United States.  Although the 2 original Dodge Neons did not get donated to the Smithsonian

Come celebrate the launch of CarSharing Portland on April 2, from 5 to 7 pm at one of our original member appreciation and recruitment venues - the Lucky Lab Brewpub, 915 SE Hawthorne.  I'm digging out some historic documents and artifacts from the early days of carsharing to display at the event. 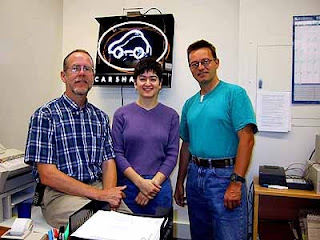 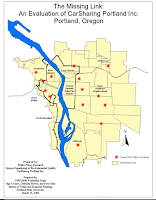 If you have some photos, artifacts or memories of the early days of CSP or Flexcar send them to me and I'll post them here.  And if you're in Portland on April 2, come to a little party at one of our original member appreciation and recruitment venues - the Lucky Lab Brewpub, 915 SE Hawthorne, between 5 - 7 pm. 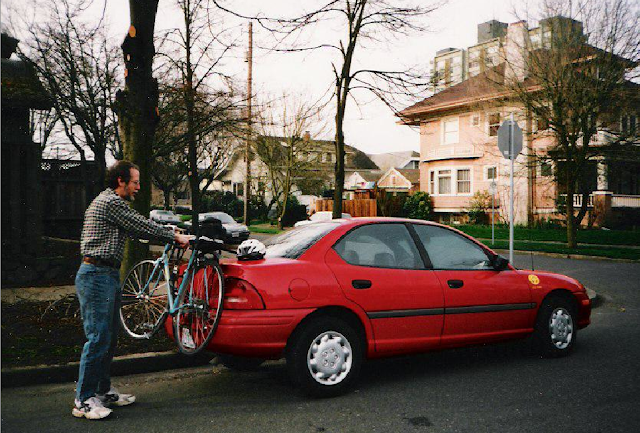