Stealth Launch in Toronto by Zipcar 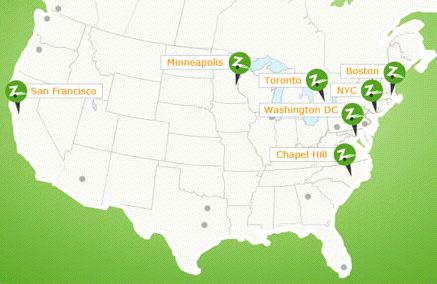 In what may be the second quietest launch in carsharing history (after Cleveland), Zipcar's operation in Toronto went live today. Only last month was Zipcar advertising on their website for Toronto staff. This makes Zipcar the second international carsharing company (after the Dutch company Greenwheels started operations in Germany several years ago) and the third city in North America with competing carsharing companies (4 if you include Zipcar's university service in Minneapolis).

Zipcar has started with 11 cars at 5 off-street locations in Toronto, according to their website. The locations are in the heart of one of the hippest neighborhoods in Toronto with one parking lot only a few blocks from the hometown rival Autoshare's headquarters. The vehicle mix includes two signature Minis, several Mazda 3's and Toyota Matrixes. They're priced at $11 and $12.75 CDN per hour ($9.90/hour with discounts).

Although Autoshare probably doesn't have the deep pockets of Zipcar, in my opinion it's well positioned to meet the challenge - with a good mix of vehicles, including trendy models including a Mini, the Smart For Two from Mercedes and the new Honda Fit. Plus, Autoshare has somewhat lower rates - $5.50/hour + 18¢/km. and daily rates are less expensive, too - $47/day + 10¢/km compared to Zipcar's $70/day including 150 km (plan discounts could lower it to $63/day). Both companies measure their daily rate per any 24 hour period - the most user-friendly way.

However, Autoshare may be at a disadvantage with a $250 refundable deposit; a 25 year age minimum compared to Zipcar's 21 year age minimum. I'm not aware of the details of each company's insurance coverage.

We'll be watching this with interest.
Posted by Dave at 9:56 AM