(Editor's note: As many of you know I had a hand in getting Flexcar started and they're also my home town carsharing company, so I admit I have a soft spot in hoping they do well. You may be thinking that because I worked for Flexcar for several years, futilely trying to prevent them from making some decisions that I thought weren't too smart, that I must have a lot of stock options to cloud my judgment - but regrettably they're history - and my judgment continues to be as clear or cloudy as it has always been.)

For me it has been disappointing that over ther years Flexcar never seemed to quite get it right. Since the flurry of activity around the announcement of investment by Steve Case and Revolution LLC., you'd have thought that Flexcar has been in relative hibernation for the past year, while Zipcar has roared ahead in getting cars on the pavement in all its markets and certainly winning on the PR front. (Help me here - I know I'm dating myself - what's the 21st century word for "pizzaz"?) 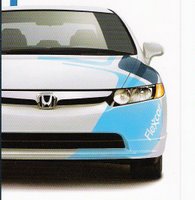 The first 100 days of new investment in Flexcar came and went and there wasn't a hint of new marketing - something that (IMHO) Flexcar has needed desperately ever since day 2. A new consumer brochure appeared recently showing a possible new vehicle branding concept (left) that will hopefully NOT take root. The new Flexcar hardly seemed to be living up to some of Revolution's catchy principles: Swing for the fences, We do a few things big and well, We believe in brands, etc.

Most importantly, I am pleased that a new CEO of Flexcar is finally on board - Mark Norman. A very astute and impressive choice - former President and CEO of Daimler Chrysler Canada - he certainly knows the car business and more than a little about branding and marketing. So this bodes well for Flexcar and, I think, for carsharing in general.

But Flexcar has its work cut out for it. Zipcar is a very disciplined organization and has kept its eyes on the prize in each of its cities, growing rapidly. It has created a very powerful and distinctive brand and it could take Flexcar some time to define itself as clearly. Let the fun begin!
Posted by Dave at 3:31 PM