For years (since 1998 to be exact), everyone has been quoting the "classic" carsharing evaluation of Mobility Carsharing Switzerland written by Peter Muheim, CarSharing the key to combined mobility. The interest in the Swiss government in carsharing hasn't diminished and the Swiss Federal Office of Energy recently issued a new report "Evaluation Carsharing" that confirms many of the good things we've been saying about carsharing and gives some interesting perspective on what's happening in a "mature" carsharing organization.

The evaluation is based on a survey of Mobility Carsharing Switzerland members - 520 households composed of 1400 members as well as 144 business carsharing members.

When the report was compiled at the end of 2005 Mobility had 63,000 members and 1700 vehicles. This is almost double the membership in 2000. 70% had used the service at least once in 2005. These customers took an about 16 trips per year with an average of 42 km per trip (26 miles). This has remainded remarkably constant during the past few years but is down from the usage levels in 2000. The typical customer used Mobility to drive only about 500 km per year (310 miles). The amount of usage does not appear to be declining the longer a person is a member, as has been observed in early US evaluations.

The average length of membership has gradually been increasing from 2.4 years in 2000 to 4.4 years in 2005 - probably somewhat related to the slower growth of Mobility during the past few years. The ratio of active users and passive (non-user) members has also increased during that time - to about 2/3rd active and 1/3 passive.

Some key findings from the report:

• The Mobility fleet of vehicles uses about 26% less gas than all cars in Switzerland, resulting in a 25% reduction in CO2 greenhouses gas emissions.

• Just like in the US, many Swiss households sold a car after joining carsharing - dropping from 47% to 31% who owned at least one motor vehicle after joining Mobility.

• And 73% of member households own a railroad or other public transit pass, an increase for 25% of the households and a decrease in 8% of households

If carsharing didn't exist 22% of survey respondents reported they'd buy a car and the report calculates a 26% increase in kilometers traveled and public transport use increase by 12%.

The report specifically mentions that about 10% of carsharing trips are "induced" - a phenomenon that has been the subject of speculation in transportation circles for a long time. The surveys indicate that 77% of members reported increased car usage after joining carsharing. However, this is offset from the savings from the 22% of the members that reported they would have driven 26% more kilometers if carsharing weren't available. This is where the real energy savings comes from since there would have been a substantial increase in private vehicle trips and a reduction in public transit trips. (See graph.) 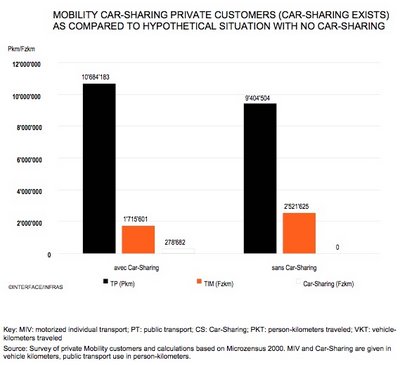 Business carsharing was also included in the analysis, based on a survey of 144 business members. The average business customer took 33 trips per year, averaging 55 km (34 miles). The number of companies owning a fleet dropped from 57% to 52%. There was no increase in kilometers traveled by car after joining.

Estimates of the future growth of carsharing in Switzerland are made, but the report cautioned it is difficult and makes the assumption (which I don't necessarily agree with) that it will grow largely in proportion to the growth of public transport use in Switzerland - or about 2-3% per year. Given the history of creative partnerships that Mobility has established over the years, including the recent venture with the Swiss Post, I imagine they'll do far better.

The report calculates that Mobility members saved 660,000 gallons of gasoline, which corresponds to a reduction of about 200 kg (400 lb.) of C02 per customer. While not huge we must remember we're talking about people who already use public transport, walk and cycle far more than most people in the US.

You can download the full report in German, with a five page English summary (pages 15-20 of the PDF) by clicking on the title of this blog post above.  The German version has additional graphs showing much more detail and the full survey instrument used to compile the report. And if you haven't been to the Mobility website, almost all of it is available in English now.
Posted by Dave at 2:32 PM