Who Would Have Guessed - Zipcar in London! 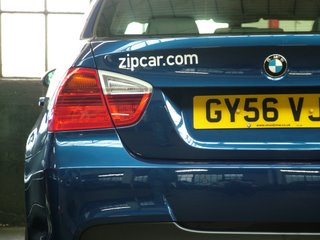 When they opened for business in Toronto, Ontario, Canada, Zipcar became the second international carsharing company, after GreenWheels in the Netherlands. But I never would have guessed that London, England would be their next city! (It probably shouldn't have, since they posted a job announcement in October.

It's a typical new city launch for Zipcar - they claim they already have 25 vehicles on the ground. Most are in carparks operated by Masterpark, a large parking operator, which simplifies one of the remarkably time-consuming aspects of running a carshare. But Zipcar has demonstrated that they can execute on what they set out to do. Even more surprisingly, they can do it without even having full staff on Board - in Chicago and Toronto they've operated for several month without a General Manager.

In London they face Streetcar, a very well-run operation with 150 cars in several parts of the city. Rates are similar, although Zipcar charges less for daily use. Streetcar's big challenge may be its £150 refundable security deposit, which Zipcar does not charge (they have a £25 or £50 annual membership fee, which Streetcar does not). It's much the same situtation as Zipcar faced when Flexcar came to Washington, DC in 2002 and had to give up charging a security deposit to be competitive.

No doubt Zipcar can capitalize on their experience in New York City, where parking is also tight and expensive and car ownership lower than the norm. And we'll watch with interest to see how they address the problem of members reserving vehicles for a weekend getaways weeks in advance and cancelling just before trip charges would apply, preventing others from making plans.

Apparently, there's nothing like having $25 million in your pocket (plus a $10 million vehicle lease line from GE Capital) to give you license to think big. Zipcar says that London will be their base for other operations in Europe - presumably the largest cities first. Paris seems like a likely candidate and Amsterdam, where they would face GreenWheels, the European giant of carsharing, and others. But Zipcar has never shyed away of competition.

No doubt Londoners are seeing teams of marketers on the streets already. Now we'll see how the Mini, Zipcar's marketing icon, does on its home turf!

A pretty good article about Zipcar's expansion to London appeared in Red Herring and can be found at the LINK below
Posted by Dave at 9:33 AM