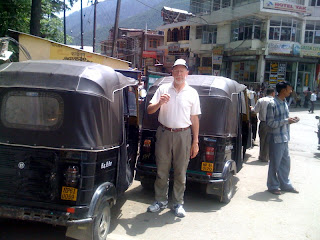 My postings has always been sporadic but none more so than recently. My wife and I were on a 3 week trip to India - our first ever - and it was a stark reminder that most of the rest of world operates under conditions a lot more basic than our gold plated lifestyle. I was also struck by the progressive policies (a ban on plastic bags in Himachal Pradesh for example) and active discussion about climate change in the newspapers.

The transportation system in India was already at capacity - trains were long and very crowded; buses were packed for 12 hours a day; roads were narrow, bumpy and travel was slow. And we could see that even relative prosperity was resulting in rapid expansion in the number private cars - not only the local brands - Maruti Suzuki and Tata but also the traditional "Asian" brands like Honda, Toyota and even new brands like Hyundai, Honda, Toyota and Chevy (!) were in evidence.

For better and worse, the Tata Nano, the $2000 car, has captured the imagination of world. But there were lots of other awfully-darn-small cars already in India, as well as the infamous autorickshaws everywhere. The good news about these autorickshaws in Delhi, at least, is that the city has mandated that all of them, and all buses, be converted to compressed natural gas (CNG).

Remarkably in the few weeks we were there I came across this op ed piece from the Times of India that mentioned carsharing - Can India Really Afford Cheap Cars? by Martin Wright, the editor of the UK-based Green Futures magazine. In the discussion the author wonders if an battery electric Tata Nano would be possible possible and then goes one step further:

You might not be able to afford an electric Nano — but why own something that you don't use every day? So what about a state-sponsored Tata Zero Carbon Car Club, of the sort springing up across European neighbourhoods, giving people the benefits of using a vehicle when they need it, without the hassle and cost of owning one when they don't? It could help cut congestion, too: all the evidence suggests that car club members drive less than private car owners — because they don't feel they have to justify their hefty investment in their vehicle by using it in preference to the bus or metro.


It's worth remembering that India has some street cred in the alternative transportation sector as well - it's the home to the Reva EV (sold in the UK as the G-Wiz). For now most of the carsharing going on in India will continue to be taxis! But what next?
Posted by Dave at 4:54 PM