(Note to readers: this article has been significantly updated since the original posting.)


With the arrival of highway-capable battery electric vehicles (EVs), a number of carsharing companies are adding them to their fleets.  And it's happening all over the world.  Here are some of operations and concepts that caught my attention.


In the North America many of the operations are adding Nissan Leafs, since it was the first vehicle in wide availability but Mitsubishi iMievs are becoming available.

(Arguably, the first EV carsharing was the Electrovaya Altcar service at the Baltimore Science Center starting in 2009, but it is defunct now.)
France — EVs from major manufacturers have been available in France continuously since the 1980s and France started the first EV carshare in 1999. 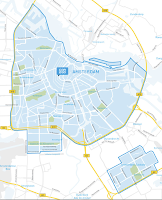 Japan was one of the earliest countries to offer EV carsharing, but took some time out until the current generation of EVs.  Several Japanese auto makers have announced EV carsharing —Nissan (partnering with Mitsububishi in Kyoto) and Toyota (at housing developments in Tokoyo and Nagoya using IQ EV vehicles).  These build on innovative demonstration projects in the 1990s at the manufacturer's corporate campuses -- a project on the Toyota campus using their earlier generation "Crayon" vehicle; and the Honda ICVS project (which currently sponsors the Intellishare program at UC Riverside and once had Honda EVs; as well as the DIRACC one-way carsharing program in Singapore; currently testing in EVs in various commuter projects.

Several independent development concepts have also been announced.  One called the "Green Cross-over Project" would locate EVs at convenience stores and equip them with vehicle-to-grid (V2G) capabilities.  Another would use home delivery storage lockers, which already have security features, to make carsharing vehicle keys available to members.


China, which has been very active in developing all sorts of electric mobility - e-bikes, a variety of cars, now a EV carsharing service has launched: 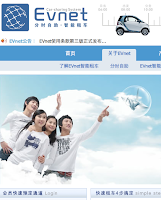 The future of EV carsharing?
Given the high cost of battery-electric vehicles themselves, plus the cost of charging stations, carsharing and EVs seem like a logical relationship. I have recommended to cities I've worked with, that if they are obtaining EVs and charging stations for their city fleet they consider partnering with a local carshare to make these vehicles available to the general public, while still having access to them for city employee use.  Such application also better utilizes the charging stations.   Since carsharing offers a variety of vehicle types, members can select whether an EV is the right type of vehicle for the type of trip they're planning to make — replacing more trips with vehicles that are the cleanest operating.  The carsharing company should be able to keep an EV in use much more than most private individuals could.
The installation of solar charging stations overcomes one of the major drawbacks to current battery EVs - instead of recharging from electricity generated from coal-fired power plants, these EVs would be truly renewable transportation.

In the long run some transportation experts believe there will be fleets of shared very light shared EVs, even smaller than Smart cars, in major cities.  These might look like the Renault Twizzy or other light vehicle designs not yet thought of. 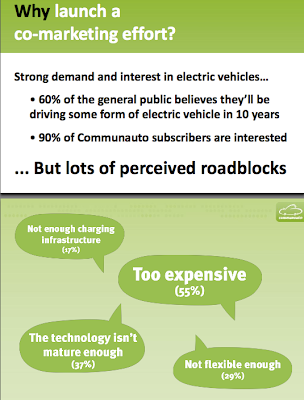 Meanwhile in the present, one of the important operational questions all carsharing operators are asking themselves is how often members won't accurately judge the range of their trip and find themselves stranded a long way from home; and what will they do about it.  As of now, there aren't any AAA trucks with quick chargers cruising the streets.  Car2go has got an even more complex situation to manage.  They don't require that vehicles be returned to a charging station so really have to depend that members will look at the fuel level reported on the web or app to decide which vehicle to take.

Where is Zipcar on the on the question of EVs?  They have been cautious (or perhaps "strategic", depending on your point of view). Only 2 years ago Scott Griffith was quoted that Zipcar would "not be going electric anytime soon".  Earlier this year they did announce a partnership with Toyota to place a number of Prius Plug In Hybrids in several Zipcar cities, so they've arguably gone at least partially electric!  For them to implement battery EVs would require a not insignificant upgrade to their system to be able to manage vehicle battery state of charge so that members would get a vehicle with sufficient range to meet their needs.

As EV technology improves (particularly range and recharge times) and vehicle costs come down (or subsidies increase) my guess is Zipcar will be increasingly interested.
CommunAuto, one of the most skillful companies in building partnerships, explains their approach pretty well in these slides from their Nissan Leaf partnership launch event.
If you know of other interesting or exemplary EV carsharing services or concepts.  Please let me know and I'll add them to this post or create new ones.  Thanks.
Posted by Dave at 4:59 PM