Some thoughts about the Avis - Zipcar Deal

When I wrote my year in review and thoughts about 2013 last week, I certainly didn't see this one coming!   Many thanks to those of you who sent me links to best stories about the Avis - Zipcar deal.

Lots of digital ink is being spilled over it —far too many showing a lack of understanding about the carsharing market (perhaps because of their New York City perspective and that Manhattan is one of the least representative carsharing markets in the US, or even North America!)  But there have been a couple of excellent articles that are worth your attention and I wanted to add a few comments of my own along the way.

Meanwhile, from Avis’s point of view, it’s buying the clear leader in what is probably the future of car renting. We’re only at the beginning of a long secular decline in the number of cars owned per household: as America becomes increasingly urban, there’s much less need for households to own a car, or a second car — and it becomes much cheaper to just rent cars by the hour or the day when you need them than it is to own a car outright and just leave it parked and useless for 99% of its life. 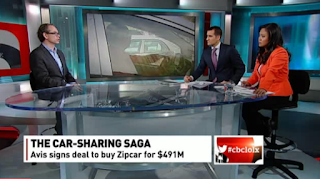 And Autoshare's founder and CEO, Kevin McLaughlin has provided a nice overview of the implications of the Avis-Zip deal, as well, in this CBC interview.  He reminds us that while this may signify another step in carsharing going mainstream, it also is part of the larger story of a growing number of peoples' changing relationship to their car and personal transportation, in general.

It's worth noting that when the merger happens Avis will becomes the #2 largest car rental company in the US, slightly ahead of Hertz, but still a fraction of Enterprise's fleet, according to Auto Rental News statistics.  And nobody seems to have noticed that Avis now has a window into the peer to peer carsharing space, as well, because of Zipcar's substantial investment in Wheelz.

It's a potentially good thing Zipcar and probably for carsharing industry in general. As we know, hourly car rental is good for some trips but generally the pricing is not competitive for multi-day trips.  If they play it right, they can meet their customers' "weekend peaking" problem much more seamlessly and help their car rental utilization, as well.   Felix Salmon makes the point:

The acquisition solves a number of problems with the Zipcar model. For one thing, it gives Zipcar easy access to the one thing it needs more than anything else: money. The car-rental business is at heart a financing business: you need to be able to finance the acquisition of new cars, efficiently dispose of them once they get too old and too used, and generally make profits by juggling enormous cashflows both coming in and going out. When you’re a small and risky company like Zipcar, that kind of fleet and cash management is much harder than when you’re a giant like Avis Budget.

It could be a good thing for carsharing in general.  Wired Magazine's Marcus Wohjlsen takes the optimistic view in his post Why the Zipcar-Avis Deal Means You’ll Finally Be Able to Give Up Your Car

For many of us, achieving the dream of not owning a car would necessitate near guaranteed access when we did need one. Zipcar, or a service like it, would have to approximate the “magic rental store” described by Kevin Kelly in his essay “Better Than Owning”.

But you can get a lot more ink by pointing out all the possible screws ups.  For example, editor Chris Brown of Auto Rental News worries about Zipcar's members in his opinion piece When Alternative Goes Mainstream:

So how will that audience take to “the man” stealing one of their own? You don’t want to mess with something unique, such as Zipcar’s carefully built culture. Traditional companies have a way of screwing things up when they get into the young and the new. (Look at News Corp’s acquisition of MySpace, though MySpace was already a sinking ship anyway.) What if Avis tries to offer Zipsters points in its loyalty program or tries to sell additional liability coverage? What if the marketing turns more traditional, or worse, tries to be hip but doesn’t get it? Would the crowd abandon the room?

But, come on, Zipcar has always "corporate carsharing" and it's clear from social psychology research that their customers understand the marketing veneer of hipster alternative transportation.  For example, in The Secret Lives of Zipcar Members by Bardhi and Eckhardt reported last summer in Atlantic Monthly

“Car sharing is not car rental and I’ve known that from the beginning, and the question is — does Avis understand that? Will they be able to maintain a cutting edge innovation and bring together a community of people who want to be co-creators and participants in a new style of consumerism? That will be the question,” Chase said.

She amplifies this comment in a longer interview with her appeared in Inc. Magazine that also includes some history of Zipcar and her other activities.

And Steven Pearlstein, posting on Wonkblog at the Washington Post, foresees potential disaster in his article How Avis Will Ruin Zipcar (I wish these headline writers would dial things down a notch?):

Oh, sure, Avis executives will say how they respect Zipcar — its culture and itsway of doing business — and promise to preserve it. But a year down the road when it comes to some decision in which they will have to forgo some cost savings or some revenue increase in order to maintain those differences, the decision will be to do it the “Avis” way. And that will be it: Zipcar as we know it will be history.

Further he speculates, I think wildly, about potential anti-trust implications of the acquisition.  Come on guys, that's nuts.

Also in the legal department TechCrunch reports on the possibility that Avis may have UNDERPAID for Zipcar!  What will those lawyers think of next?

But GigaOm sees this as part of the inevitable march of the internet.

If there is going to be one theme for 2013, then it is the inevitable march of technology (and the Internet) into everything we do and every aspect of our daily life. From car dashboards to rental cars – the fun is just getting started.

Now if only GigaOm would pay attention to Zipcar's endless press advisories and start spelling it "Zipcar" instead of ZipCar..."  (Just a pet peeve of mine.)

My own view is that Avis understands that the challenge they face is how structure the new relationship to implement the synergies between the carsharing and car rental without messing up Zipcar in the process.  Whether they can avoid the temptation to maximize thing for the short term that Pearlstein mentions is the challenge. 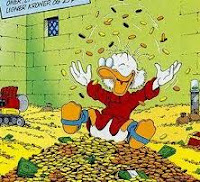 And this was probably as good an "exit strategy" for Zipcar's investors as they could hope for.  While some people think they came out okay (but without the the huge profits they once hoped for), such as Lizette Chapman in the Wall Street Journals Venture Capital Dispatch, she makes a good point about the future

Going forward, a big question in venture capital is whether any new transportation models like ride-sharing companies Zimride Inc. or on-demand car services such as Uber will thrive.

By the way, this article is an excellent quick summary of the bumpy ride carsharing VC investors have seen over the years.

I've reviewed a number of business plans for startup carsharing companies and just about all of them hypothesize a rental car company taking them over.  Zipcar did it!  (Admittedly, taking the long way.)  What hasn't been widely acknowledged in these reports, that now seems obvious to me at least, is that it's likely Zipcar's investors have been trying to find a way out for quite a while — starting with the run up to the IPO and now this.

So now we have the big three car rental companies in the US all with substantial carsharing operations:
And something else that hasn't been widely reported, even in the technology press, is the rental car industry's interested in what I would call unattended car rental — meaning, an easy to install (and uninstall) telematics box in rental cars, enabling pre-screened customers to bypass the counter and go directly to the lot.  This has all sorts of implications for the rental car industry (but that's another story)  As I have noted elsewhere, it also has implications for the carsharing world - potentially further blurring the lines between carsharing and car rental.

But for now, what about the indie players in the North American carsharing world?  For now, they're doing just fine in their individual markets, thank you.

Best of luck, everyone!