More consolidation in the carsharing industry.

Reports from Automobilwoche of Germany say that Volkswagen Financial Services is purchasing a 60% stake in Collect Car BV of Rotterdam, The Netherlands, operators of Greenwheels Carsharing.

The new owners will be a joint venture between VW Financial Services and the current majority owner Pon Holdings, a Dutch conglomerate with transportation-related holdings in auto importing and bicycle manufacturing.


"We see, pay-per-use approach interesting growth opportunities. With Greenwheels you win a very successful partner whose experience in car sharing and the integration into public transport concepts will move help us move forward."

VW launched developed and its own carsharing service with a pilot project called Quicar in Hannover, Germany in November, 2011.  The service was based on a traditional station-based, round-trip service model.  Quicar has some links to local VW dealers for longer-term rentals.  Quicar has hinted at future innovations in service since launch and many observers wondered if they would expand into the now crowded arena of one-way/on-demand floating fleet carsharing, pioneered by German automaker Daimler.

In 2012 VW demonstrated Quicar to their world-wide network of importers and affiliates, apparently to gauge possible interest in Quicar offerings in other countries.  But, to date, Hannover is the sole location for Quicar.  The German market is highly competitive with several competitors in ever major market, including both round trip and one-way services. 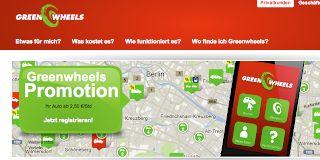 Greenwheels started in 1995, is the Netherlands largest carsharing provider, with more than 2,000 vehicles total.  They face competition from ConnectCar and StudentCar in a number of cities.

Greenwheels began service in Germany in 2004, taking over operation of the ill-fated StattAuto operations in Berlin and Hamburg.  It now operates in 7 major cities in Germany.   While the limited range of vehicle choices, with an emphasis on smaller, economy vehicles, appears to work in the Netherlands, it may be holding them back in Germany.  Another factor holding them back there may be the reportedly unresponsive customer service.

Greenwheels had been eyeing the London and made a small effort in this sprawling market, negotiating permission for parking in only two boroughs.  But in March 2013 they quietly pulled out.


This is a bold move by VW (although probably "small change" by automotive standards) and could signify shake up the round-trip segment of the carsharing industry in Germany.  Clearly, VW brings bundle of Euros to the table for technology development and future expansion, as well as easy access to vehicles.  (Greenwheels current fleet in the Netherlands is composed largely with French sedans and in Germany Toyota Verso and Yaris.)   Greenwheels brings a strong brand, a large membership base and a well-honed operation, at least in the Netherlands.

This appears to yet further confirmation that car manufacturers see the handwriting on the wall about "peak car sales" in the European market.  To date four auto manufacturers in Europe have implemented one-way/on-demand services: BMW (DriveNow), Daimler (car2go), Citroen (Multi-City) and Renault (Twizy Way pilot); while Peugeot continues their Mu project.  Even Opel/GM Europe is now giving indications it wants to get in the game, as well.

One question everyone will be asking is what will happen to the Greenwheels and Quicar brands?  VW has spent a significant amount of money developing the Quicar brand (although outside of the carsharing industry the brand is mostly known only in Hannover), while Greenwheels is well known and respected in the Netherlands.  Hopefully, they will learn from Zipcar's experience with Streetcar and undertake whatever transition they decide slowly (as they've shown with Avancar branding).  Another challenge they face will be the merging of much different corporate cultures.

Another chapter is beginning.  In the meantime enjoy this nice 30 second Quicar video