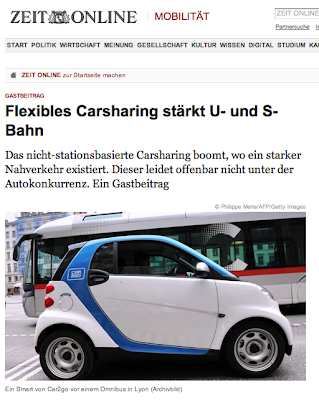 A German research organization is claiming that free-floating carsharing (like car2go and DriveNow) compliment public transportation services not cannabalize them.

The possibility of such competition has expressed by a number of mobility analysts, including during the start up of the Autolib' program in Paris, as well as in cities if public subsidy might be involved free-floating programs.

The first report comes via an article in the German newspaper Die Zeit by Andreas Knie, the CEO of InnoZ (German Innovation Center for Mobility Social Change in Berlin.

The results are based on an analysis of trips Inno-Z did in Berlin - the world capital of carsharing, with more than 3,000 shared vehicles an estimated 200,000 members of 9 companies, including 3 free floating services (1 of which is all-electric vehicles)

A ten minutes drive, priced from 28 to 34 Euro cents per hour,  might cost as much as 14,90€. By comparison, classical car-sharing is calculated to cost less than 8€ for an hour including the distance traveled in kilometers.

Here's the link to the original Die Zeit article in German and Google English.  Thanks for Vjecko at CarsharingBlog for the information.
Posted by Dave at 5:00 PM