Where Does Carsharing Fit in the Scheme of Transportation Modes?

When I was first getting interested in carsharing, way back in 1996, I came across a wonderful graphic that really helped me understand the role of carsharing in transportation.  You've probably seen this graphic in numerous Powerpoints — which modes are best for which types of trips, based on the Distance of the trip and amount of Flexibility (time, destinations) needed during the trip.

I first saw the graphic on Eric Britton's foundational website and e-mail discussion group at World Carshare Consortium, which is still alive and well (as is Eric, who has created more website and discussion groups since then than I can keep track of!)  He told me that the original source, from 20 years earlier, didn't actually call it carsharing but the term "paratransit"(after all the term wasn't coined until 1987 when carsharing as we know it got started, almost simultaneously in Switzerland and Germany).  Somewhere along the line, the word Carsharing got substituted and the chart became history. 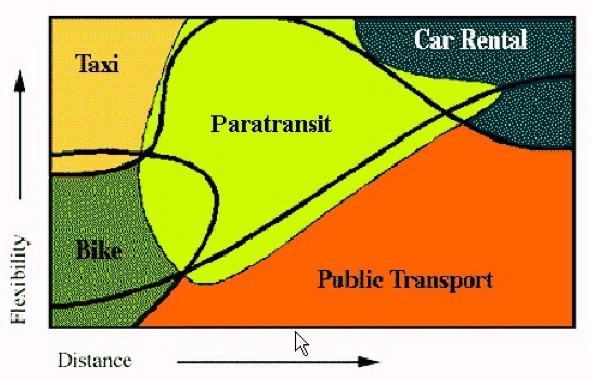 Well, that graphic was history, until now. But even carsharing evolves and now we have a new flavor - one-way/on-demand carsharing (e.g. Autolib, Car2Go, Enjoy, JoeCar), which has somewhat different trip characteristics.  So I was very pleased to find an updated version of this chart from Marco Viviani of CommunAuto, Montreal, showing the place for One-Way.

Something that Viviani's graphic does very nicely is to convey what those swirly black line arcs in the upper graphics represent - the possible overlap between modes.

One might argue that the One-Way bubble should really be a big elipse that also slightly overlaps with Public Transit, since the most recent evaluations show a slight decrease in transit trips by one-way users.  (But, for what it's worth, I would suggest this should not be a big concern since these are likely trips that would have been difficult to do on transit - either because of time and schedules or because of the number of changes required.)

I suppose one could include Uber, Lyft and Sidecar in the Taxi category, if you really wanted to update it.  The next question will be where autonomous cars belong on the chart?

Hope this is useful.