Car2Go Saddles Up in the Wild West 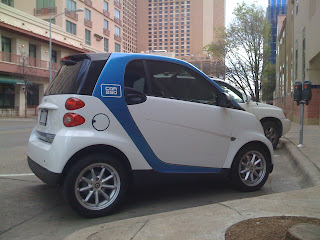 The next chapter in carsharing in North America is going to be written in Texas. Daimler AG announced that the next city they would test market their innovative Car2Go service would be Austin, Texas. Hardly your prime carsharing territory (although Austin Carshare has been making a go of it).

And, of course, it's the first major carsharing operation directly funded by an auto manufacturer, in this case Daimler, which is looking for new business opportunities in the face of radically different environmental and economic future. Here's the car2go promotional video with English titles

We can only hope that Daimler is planning to fund some serious evaluation studies on the usage and impact of car2go since the implications of a such a service are staggering. What is the competition for this service? What trips will it replace? How many Texans want to drive a Smart car? How much will it compete with traditional carsharing (my guess is not too much - as the Smart car itself may be the limiting factor)?

If you'd like to understand more about what Daimler is thinking about in creating the car2go concept, they've posted a 5 minute video (in English) from an October 2008 press conference with several people from the Daimler Business Innovations Group describing the concept.

They've got a lot to do between now and projected fall launch. (Full disclosure, I've been involved with the German consulting firm, Team Red, to help get this project get off the ground.)

In conclusion I can't resist including one of their publicity shots. I doubt it will get any Texans off their horses and on to cow2go! 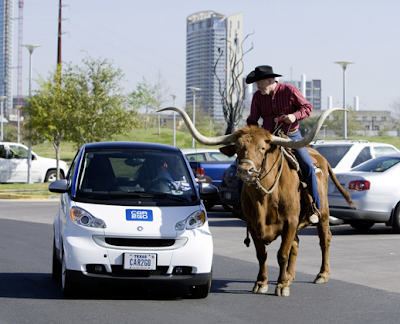 As ex Presidente (fortunately not for life) George Bush (who lives only 90 miles, but light-years) away from Austin said, "Bring 'em on"! Yee ha!
Posted by Dave at 8:55 PM