Flinkster - Germans Take a Page From the Zipcar Playbook

DB, theDeutsche Bahn, the German railroad operator, has been actively branching out from moving people on rails, offering carsharing (DB Carsharing), car rental (DB Rent) and even bike sharing (Call a Bike) in many German cities. Now they've created another service and another brand, with a unique service model - a hip carsharing service that appears to take it's queue from Zipcar - called Flinkster. 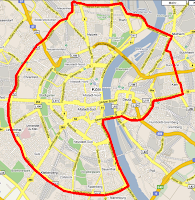 After several months of rumors, Flinkster finally launched in Stuttgart last week, while the launch in Köln announced but, as yet unspecified. Early reports indicated it was going to be similar to the "floating fleet" concept by Daimler of car2go in nearby Ulm, Germany, which would allow vehicles to be parked anywhere in the downtown area. But with actual launch, there's no indication that Flinkster is anything more than a hip version of classic carsharing. Flinkster is actively seeking parking places in these cities and will pay a bounty of membership, usage or even a 2nd class rail pass for parking spaces. Interestingly, the maps provided on the Flinkster website are the DB Carsharing maps and list all vehicles at a location - with Flinkster appearing as one of several classes of vehicles at a location. Here's an early map of the "floating fleet" area, now nowhere to be found on the Flinkster web site. Instead,

The best rate offered by Flinkster is € 1,50 + € 0,25 per kilometer (the equivalent in US dollars of $2 per hour + 20¢ per mile). In comparison, the standard rates for Cambio Carsharing in Cologne charges € 1,70 per hour + € 0,31 per km. But Flinkster's "occasional user" rate actually makes them the highest in Stuttgart according to a comparison done by German carsharing blog. Flinkster offers an increased insurance coverage of € 4 per trip or € 10 per month - reducing the deductible from € 1000 to € 300 per accident.

Cambio reported has about 250 vehicles and over 7,000 members in the city. In one news report Cambio spokesperson is quoted confidently stating, "About Flinkster we are relaxed, our biggest competitor is still car ownership." True, but...

In an interesting move, Flinkster partnered with Alfa Romeo, but not to provide sports cars, but a very nice 2 door, 4 seat sedan, the MiTo, equiped with Bluetooth and CD/mp3 players to appeal to the youth demographic DB says it's after. They emphasize that vehicle meets the strict Euro 5 CO2 standard.

For what it's worth, the name Flinkster was created by a real marketing person. "Link" in German has a similar meaning in English. "Flink" in German means quick and the "ster" (as in "friendster" or "hipster") to make the whole thing personal and cool - sort of "Quick-link-ster"

Perhaps DB wanted to get Flinkster launched and will implement the "floating fleet" concept at a later time (the operational challenges are significant). Otherwise, it seems strange to create a separate brand, especially one that seems likely to cannibalize customers from DB's existing carsharing and rental car services as well? It's worth remembering that for the past decade Germany has been allowing competition in passenger rail service and there are many other regional passenger rail operators, such as Metronome, that offer service renting DB tracks. So it appears that DB has gradually been trying to position itself as an all-around mobility provider, as well as providing rail passengers with the convenience of "combined mobility" (a concept that was first gained prominence about 20 years ago (in an early Swiss carsharing report, "Carsharing - the key to combined mobility").

We will watch with interest. The times they are a changin'.
Posted by Dave at 2:48 PM