Speaking with Eric Britton of World Streets today, I was reminded that the first one way electric vehicle shared car system goes back way before Praxitele, to Witkar in Amsterdam in the late 1970s and early 1980s. Watch the short video and I think you will be amazed to see all the elements of modern carsharing - a very clever (but crude) docking and recharging system, card access and computer control of vehicle access with the member entering their PIN number with a dial phone!) Rates were reasonable: 3.5¢ (equivalent USD) per minute but the low speed EVs had only a 6 km range and slow recharging time. Hopes were high that the system of 20 stations and 35 Witkaren would offset 10% of trips in the inner city.
Eric wrote a nice piece about it in Wikipedia so I'll let him do the talking:

The Witkar (Dutch, literally "white car") is one of the first technology-based carsharing projects in the world. It is the invention of Dutch social inventor and politician Luud Schimmelpennink, an industrial designer and at the time Amsterdam city councilor.

The first actual Witkar project took place in Amsterdam between 1974 and 1986. While it provided daily service for more than four thousand registered users over those years the project never got beyond the limited demonstration phase due to a lack of support by government.

The system was initially conceived in 1969 by Schimmelpennink in order to reduce traffic in central Amsterdam, but it failed to win the support of the City Council and was spun off to be developed by a specially formed co-operative society. The co-operative managed to raise loans of US$ 250,000 for the first phase though 1974. This included the design and construction of the vehicles, the purchase of a PDP-11 mini-computer for the central control system, development of the control software, and construction of the first 35 cars and five stations. A further 10 stations were scheduled for operation by the end of 1976, by which time the fleet should be extended to 100 vehicles. The ultimate target was 150 stations and 1000 vehicles, but as a result of lack of government support this never happened.

The core of the Witkar concept is that of people sharing small environmentally acceptable vehicles specially designed for urban use. It was seen by Schimmelpennink and his team as a way to wean people away form conventional cars ownership and use, on the grounds that such vehicles have no place in densely settled cities.

These were specially designed electric vehicles. They had two seats, and offered little luxury. They were very easy to recognize. The vehicles were located around the city in pods. In Amsterdam 35 of these cars were available to hire from 5 stations in the city centre. The original system was designed for fully automatic control, including direct debit of hirers' accounts at the Amsterdam Savings Bank.

The idea was that any person could take a Witkar, and leave it at the Witkar station closest to his destination. The initiators thought that the flow of traffic to and from these stations would allow for an even spread of Witkarren (the Dutch plural of Witkar) . The system actually operated. The problems were several: the vehicles needed long recharging times, so many were needed to have some on the road all the time. The biggest problem was that the flow of traffic was generally in one direction. As a result of this, some stations were always full, and others always empty. To correct this by moving Witkarren would have caused a lot of extra traffic. 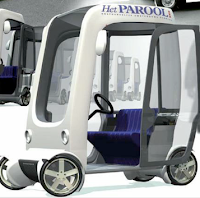 As of this date (January 2007), Schimmelpennink and his associates are planning a new Witkar program for Amsterdam, where he has recently been re-elected to the Municipal Council.

This photo is a rendering of the Schimmelpenink's updated Witkar concept. Additional information about the orignal project can be found Quip van Winkel's . . Witkar posting,
Posted by Dave at 11:49 AM