Car2Go All Charged Up about San Diego 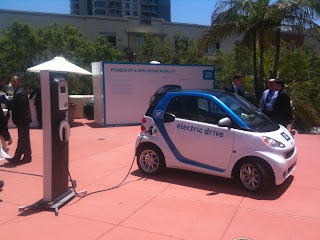 Today car2go North America made a double announce-ment - its next city in North America will San Diego - and, through a strong partnership with the City of San Diego and various other agencies, it be fleet of all electric fleet Smart for Twos - starting with 300 vehicles. (This follows the announcement in April of all-electric car2go fleet in Amsterdam.)
Although the exact operating area (free-floating parking zone for vehicle returns) hasn't been decided, with that many vehicles it seems likely that the operating area will pretty large. Vehicles do not have to be returned to a charging station, but can be returned anywhere within the operating area. Users will be able to see the approximate state of charge for each vehicle on their iPhone or computer.

Rates have not been set, but CEO Nicholas Cole said it was likely they will be similar to Vancouver, BC - 35¢ per minute or $12.99 per hour - basically, the hourly rate kicks in after 38 minutes of use.

They plan to launch sometime in the fall with a free registration blitz followed by the start of operations several weeks later, similar to the Vancouver launch. Because gasoline vehicles were brought for the press event from the Austin fleet, San Diego unexpectedly showed up on the car2go iPhone app.

The announcement signifies the return of carsharing to San Diego, following a lull after the now forgotten heyday of carsharing in San Diego, when Flexcar had 85 vehicles here.  Presently, Zipcar has two vehicles at University of San Diego campus and several more out of town at UCSD.

As in Austin and Vancouver, two types of reservations are possible - a 30 minute "hold" to give the user time to get to the vehicle after identifying it on a computer or app. Or a vehicle can be "reserved" up to 24 hours in advance. But the meaning of reserve is different than traditional carsharing programs, where a specific vehicle at a specific location is blocked for use. Because of car2go's free-floating parking, what you actually reserve is the "closest vehicle to the address you specify". 15 minutes before the start of your trip, you get a text message (SMS) telling you the location of the closest vehicle. With so many vehicles, it would appear that the need to make a reservation isn't really that necessary. (Chief Technology Officer for car2go Helmut Ritzer told me that they've actually ended the 24 hour reservation option in Ulm.)

The other major partner in this project is Ecotality, which plans to install as many as 1,500 of their Blink charging stations in the San Diego area. Jonathan Read, CEO of Ecotality, echoed the sentiments of other speakers at the press conference saying he hoped this announcement would make San Diego "the ground zero of the electric vehicle movement" (presumably he meant that in a good way!)
San Diego Mayor Jerry Sanders indicated that City Council was expected to pass changes to the municipal code that would allow car2go to park on street and provide dedicated on-street parking for vehicle recharging.

The Smart EDs (for "electric drive") will have the same touch screen and internal telematics as the regular gasoline-powered car2go Smarts. The vehicles will have an estimated range of about 80 miles and they're hoping that vehicles will be able to go for 2 to 3 days worth of trips between recharging. Car2go reports that using fast chargers, the Smart ED battery pack can be brought up from 20% to 80% state of charge in about 3 1/2 hours.

I took one of the electric Smart's for a test drive through the hilly part of downtown San Diego and found the acceleration certainly adequate but without as much of the low-speed torque that is so surprising in the Nissan Leaf. (Presumably a little less acceleration means a little longer range?) As with other Smarts it feels far more secure and stable than its diminutive size would suggest.

During the press conference speakers revealed some other nuggets about the car2go service: