How many vehicles does carsharing replace? 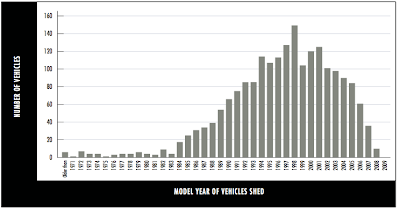 The detailed analysis was conducted on a household level, since there may be several members in a household, and excluded the the behavior of inactive members, those no longer actively using the program, about 10% of the sample.  The survey included most of the non-profit carsharing companies in the US, as well as Zipcar members.
The major finding was that household ownership of a vehicle dropped from 0.47 to 0.24 vehicles per household (at a 90% confidence level).  Most of the shift, about 80%, was from one-car household going car-free.
Further, 25% of the respondents said they would might buy a vehicle if carsharing were not available.
The fuel economy of vehicles that were shed was about 23 mpg, being replaced by the average of 33 mpg for carsharing vehicles.  About 60% of the vehicles shed were between 5 and 15 years old, with 15% being between 1 -5 years old.
The study did not include those using carsharing on college campuses or in business situations since they are a minor part of the total and because their joining and usage motivations are likely to be somewhat different than those members joining in a neighborhood.
This is a good reminder that the benefits of carsharing will vary depending on the location and type of service - downtown residents will respond differently than those in less dense neighborhoods
And, I would add that new types of carsharing, such as peer to peer carsharing or even mobility on demand services, such as car2go, will probably not have the same impact as "classic" carsharing.
A very readable version of this report was printed in the Spring 2011 University of California Access magazine, available here (PDF) or the much more detailed TRB report here (PDF).
Posted by Dave at 2:55 PM