Car2Go continues to grow, but not without some bumps in the road

As you may have figured out, I'm fascinated by Daimler's car2go service — both the operational challenges and the effects these one way/on demand services might have on cities. Car2go also provides a reminder that even a big well-funded operations has some growing pains. (Honest, guys, you may think I'm picking you but I'm not.)

So here are some things about car2go that have caught my eye recently:

First the good news — Seattle became the 18th car2go city (8 in North America) this month as Daimler rolled out the first 150+ or so a planned 330 Smart car fleet in the Emerald City.  I'm told the service area is similar to Portland's in size but it seems bigger, perhaps explaining the greater number of vehicles for Seattle than Portland.

It will be particularly interesting to see the flow of cars at the high traffic destinations, such as the downtown ferry terminal.

Negotiations with the City of Seattle can't have been easy since Flexcar and Zipcar both struggled to come up with on-street parking arrangements.  But once the deal was signed, the trucks full of Smart cars headed out to Seattle, pronto!

Way2go car2go!  Now if only users in Seattle and Portland could drive cars in Vancouver, BC without a special procedure.

Meltdown in the Frozen North — At the end of last month car2go's farthest north outpost in North America and certainly the coldest climate they have cars in — in Calgary, Alberta, Canada — was hit by a double whammy of very cold whether and wireless problems.  The very cold weather killed many Smart batteries and then problem with the wireless provider, Rogers Wireless, (perhaps related to the simcards in the Daimler's proprietary carsharing telematics.  The wireless problems were restricted primarily to a 60 square block area, but problems persisted for several days.

Every carshare operator could spend hours telling you dead battery stories.  Nor are simcard and wireless system problems unique to car2go, although this one must have been somewhat vexxing for Daimler since they were operating in several other Canadian cities without these kind of problems.  Fortunately, it's a rare occurance - spot problems, very occasional in other cities.

The other thing this Tweet is all about is the use of social media.  In my book Car2go is an astute user of Twitter.  But once you start going down the social media path you have to be willing to take your lumps with it, too.  Either that or you will get hammered by your members and critics who will hashtag you into submission!   Car2go was out there telling its members it knew it had problems, and had to keep telling them about isolated problems for over a week.

Bumpy Ride in London — British carsharing researcher Scott Le Vine has written an excellent opinion piece on the web site New Geography that's well worth your time.  It describes on the on-going challenges faced by Daimler in implementing car2go in London.  Le Vine is the author of several important research projects and reports on carsharing, including Car Rental 2.0: Car Club Innovations and Why They Matter and is a trustee of Carplus, the British carsharing ("car club") nonprofit advocacy group that promotes carsharing, (very successfully, I might add). 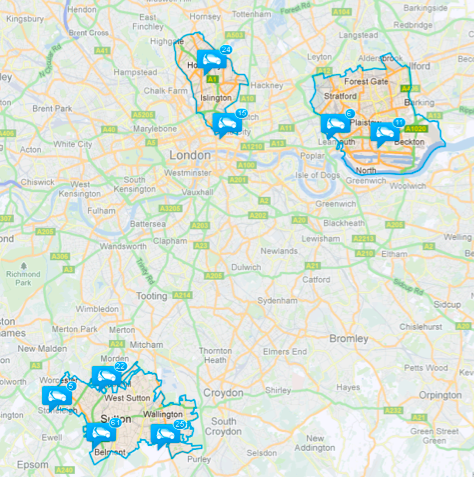 Le Vine points to the many, many local jurisdictions within "London" that control the roads (and hence parking) that has resulted in a very fragmented Home Area at launch.  He says that Daimler appeared to be willing to take its chances in order to get started in London first since they must have been aware that BMW's Drive Now already had staff in London, as well.  It's worth nothing that car2go in Ulm has some discontinuous Home Areas that members can drive between, although the separate is nothing like car2go's in London. (Knowing very little about London, my guess is that there won't be many Sutton vehicles making the trip to Islington.)

But, actually, the most important part of Le Vine's article for me, is about what we know about the possible impacts of car2go.  Basically, he says, we don't know!  But he has done some research that is at least suggetive.  Based on surveys part of his research for the Car Rental 2.0 report he estimates that the benefits of one way/on demand services is likely to be much smaller than classic round trip carsharing:
These numbers are no where close to the traditional carsharing, summarized numerous places but sometimes quoted by car2go in their pitches to cities, as I have reported previously.   So, I hope cities will take heed and, for now, primarily look upon these services as increasing residents' mobility options (and a city's hipness factor) and not primarily as an environmental or traffic solution.  (Again, I'm not picking on you guys, just sayin'....)
Posted by Dave at 5:17 PM