Autoshare in Toronto took delivery of the first of several Daimler-Chrysler Smart cars in June and has been getting lots of "kilometerage" (mileage, get it?) from them. Naturally, first the staff had to have their turn behind the wheel. They've now been in service for a couple of weeks so I'll let Kevin post whatever comments he'd like.

The Smarts have many idiosyncrasies which make it hard for us North Americanos to just jump in them and figure out how to drive them - starting with where to do you put the key and including the 6-speed automatic-manual transmission. All Smarts being sold in Canada apparently are diesels, so that adds another worry for Autoshare, that someone will try to fill the tank with regular petrol! Naturally, Autoshare went as "green" as they could and started out with biodiesel. 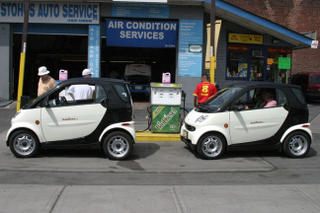