Zipcar and Flexcar on a roll, Autoshare and I-Go keep rolling along

(There have been so few posts recently you probably thought I'd turned into Rip Van Winkle, but such is not the case. I've been distracted by summer recreation (Yosemite and North Cascades, among others, as well as a major home remodel and an upcoming birthday - one of the "big" ones.) 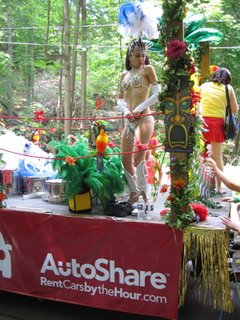 But the march of carsharing hasn't been taking a vacation while I did, so let's get caught up. Last May, Toronto's Autoshare faced competition for the third time in its 6+ years - this time from Zipcar. Now they're up to 60 cars, compared to 115 for Autoshare. Yes, they've got a Mini and BMW and Volvo, to supplement their Toyotas and other cash cows. But Autoshare, used to competition, has been putting some variety in its fleet, and tweaking its rates and policies, as well.

Zipcar got off to rip-roaring start in Toronto, causing a bidding war for prime parking spaces and prime street corners for their neighborhood marketing teams and even trying to one-up each other at Toronto's Gay Pride parade. Have you ever seen carsharing marketing like this?

And Zipcar quietly launched in Chicago a few weeks ago - they're now up to 13 vehicles at 4 locations up the north shore of Lake Michigan. Apparently, they decided to go ahead even though they hadn't gotten the rental car tax concessions they had been working so hard for. I-Go had been anticipating competition for some time and has been adding cars at breakneck pace to try to innoculate themselves by covering the prime neighborhoods. They up to 68 cars, by my count.

Meanwhile, competition continues in San Francisco, with the pace of adding new cars finally slowing down.

And as Flexcar's new CEO was getting oriented, Flexcar quietly staked out it's next carsharing city - Atlanta. The beachhead being six cars at Emory University and a deal with Lanier Parking Holdings, a major parking and transportation management company there. This project has been in the works for a long time and was unveiled at Emory on June 19.

Having a big corporate customer is a great way to take the sting out of launching a new city. Given Atlanta's reputation that the car and freeway are king, it's likely to be a challenge for any carsharing company - but Flexcar appears to have gotten its ducks in a row! 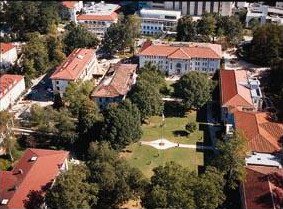 And Flexcar's partnership with Lanier is a very strategic move, since Lanier at the heart of much more than parking. They run shuttle buses on college campuses and airports, as well as parking at 300 properties in 35 cities. Lanier's founder and CEO is the chairman of the Atlanta Convention and Visitor's Bureau.

Atlanta is experiencing major residential development with new condos everywhere and redevelopment in many neighborhoods so the timing is fortuitous. In addition to the MARTA light rail, Atlanta is getting a streetcar to enable a more urban lifestyle. "Atlanta has reached a 'tipping point.' The Atlanta lifestyle has become more and more cosmopolitan and consumer needs have become more sophisticated," said J. Michael Robison, CEO of Lanier. "We decided to seek out an innovative partner who would be a good fit in Atlanta."

Flexcar will also have cars at the location of long-time corproate partner from the west coast and DC - Equity Office building at 191 Peachtree Plaza downtown. And cars at the Georgia Tech campus are expected soon, as well.

It's worth noting that Atlanta is on Zipcar's map for future cities, as well, so we may soon see a repeat of competition seen in Washington DC. My sense is that two companies in a city as big as carsharing is likely to mean more members for both companies. It's going to be busy in those trenches!

Here's the current map of Zipcar and some possible future locations.

An historical footnote: Old timers in the carsharing world will remember Atlanta as the site of first national carsharing conference in 2000 and the home of the now defunct E-Motion Mobility, brainchild of Don Panoz, who was going to take Smart cars, convert them to all-electric, design his own reservation system and vehicle electronics and set up a network of stations all over Atlanta, as well as other cities. Curious? You can relive those days by viewing the old E-Motion website by clicking the LINK below courtesy of Waybackmachine.org which has cataloged versions of most old websites in its archive.
Posted by Dave at 5:09 PM