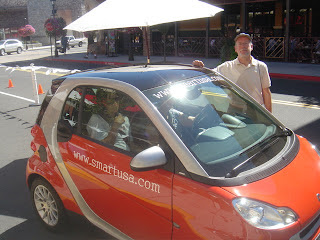 While the 2008 seems to have toned down some of the mechanical idiosyncrasies of the first generation Smarts (particularly the gearshift), the cool factor has also been dumbed down. (I mean, the interior, certainly spacious enough, even for a 6 footer driving around town, is pretty ho-hum. And where are those cute little thingys that used to stick up on the dash?)

That said, the car drove nicely (at least from my 5 minute spin around a couple of blocks) and had enough get up and go (but one could tell it wasn't the turbo engine of previous generation). It's the first time in a while I've driven the automatic/stick shift with its hesitation between gears. But once you get the rhythm of it, they're fun.

But I gotta admit, some of the sour grapes is coming from some poor customer service on the front end. I'd dutifully paid my $99 to be the first in line to order one and never got an answer back from the email address provided in the notification for the Portland demo stop. Then my test drive consisted of driving around a shopping center parking lot and on a couple of neighborhood streets - no freeway driving allowed. (I'm sure it will do fine - I've driven one of the first-generation models from Seattle to Portland but I wanted to get a taste with this one.) And the demo handler who rode around with me was clearly getting bored with the process, even though she'd only been at it for 2 hours that day and she'd only been working 10 days for the company. She didn't bother to point out any of the controls or features but just when to turn left (and, I must admit) when I was driving too fast for her liking.

Should carshares put them in their fleets? Definitely! They certainly attract attention. And although they cost as much as a Honda or Toyota, I would expect a couple of them in the fleet would pay their way. Am I going to sell my 1994 Toyota Corolla for one of these? Probably not; they seem too specialized of a car for the around town needs of my wife and myself. I'll use carsharing for my specialized car needs.

I'm hopeful that a future opportunity to drive one will help me revise my opinion as they are a unique car with a role to play to American mobility. Here's where to get info on the Smart. And if you're concerned about safety here's my favorite Smart crash test video - be sure to watch it to the end.
Posted by Dave at 4:08 PM