Cambio - A Model for US Carsharing Cooperation?

There have been ongoing discussions in both Canada and US about closer cooperation between the independent carshares. And a few steps, such as this indication of "visiting rights" for members of other carshares. There's lots more opportunities for cooperation, especially in areas that could reduce operating costs by sharing work.

I've recently been to Germany (where there are 227 German cities with carsharing) and had a very interesting meeting with the Joachim Schwarz CEO of cambio KG, the largest carsharing organization in Germany (15,000 members, 8 cities), and which also operates all the carsharing in Belgium (4,500 members, 11 cities), as well. 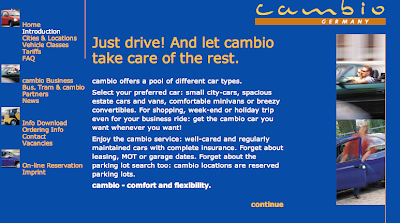 What's interesting to me about cambio (they like to spell it with a lower case c) is how they operate and how they were established - quite different from growth of national carsharing in the US.

Mr. Schwarz told me that cambio was formed in 2000 when the 3 of the larger independent carsharing organizations in Germany decided they would be more competitive operating under a single, joint brand (StadtAuto Bremen, StadtteilAuto Aachen and STATTAUTO Köln). It was a time when there were well over 100 mostly smaller independent carshare companies operating in Germany. Large corporate players, ShellDrive and DB Carsharing had or were about to enter the market so the time was ripe for cooperation in the face of competition.

Cambio is a brand, which includes not only the logo but also a standard for a level of service the customer can expect. Cambio has several different types of relationships with member carsharing companies - some are full-fledged "cambio" member companies, others have cooperative agreements so that cambio members can use vehicles, and finally, cambio provides "back office" services to other carshares (another 16,000 members, 18 cities, 600 cars) - most notably the Stadtmobil operations.

Mr. Schwarz explained that the idea in the creation of cambio was to get economies of scale in areas where it would lower costs, and stay local in relation to the customer and the fleet, which the local companies do. The process has ended up at about 15% of costs going to central services. These services include reservation system, servers, help desk (for internal use), customer call center, brand, website marketing and press relations, joint purchase of cars, insurance and other services, bookkeeping and accounting services..

Cambio has developed a very effective website and reservation system and they've thought through a number of operational details in very clever ways. For example, the way they've structured their web res. system, through a simple arrangement, they are able to determine what type of car the member would really like to find at a particular location. And cambio is the only company outside of Singapore to offer open-ended trips (no fixed return time). Cambio system-wide data shows a 93% availability that the customer will get the car they want when they want it; and 99.7% reliability that the car will be ready to go when they get to the station.

In addition to the brand and support, one of the most valuable aspects of affiliating with cambio is providing proprietary operational data and comparative benchmark performance information to each member. This enables them to see how they're doing against all other companies' averages.

Decisions about cambio are made in an annual meeting of member companies over a 3-4 days. Any changes in pricing, new features for the website, technology, etc. are decided at this meeting. Of course, all this has a price - about 15% of gross revenues. The exact amount is based on a formula and has actually gone down over time - it's at about 13.5% now.

The development of carsharing in Belgium provides an interesting case-study, somewhat different than the process that went into the original cambio company. Cambio joined a non-profit organization, Taxistop and the national auto club VTB/VAB to create an operating company Optimobil Belgium. In turn, Optimobil owns 3 subsidiary companies, since the linguistic regions of Belgium are quite distinct. The public transport companies in two of the regions have made major investments in their respective regional company. Optimobil provides similar services to its Belgium subsidiaries that cambio does in Germany.

I think the cambio model provides a model for cooperation between carshares in the US and/or Canada. Cambio is certainly interested in consulting and possibly some sort of joint-venture in the US. They're well aware that Germany isn't the USA (and even Canada!). But they have lots of direct experience about what works (and what doesn't work) in such cooperative arrangements. If you're interested in more details about how this cooperative arrangement could be developed, please contact me.
Posted by Dave at 9:59 AM