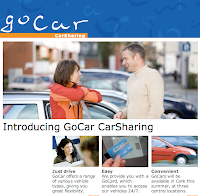 The announcement didn't get much publicity but Cambio GmbH of Bremen, Germany has put together a deal to bring carsharing to the Republic of Ireland. As the opening press release says the service will launch on July 4 in Cork in the south of Ireland.

It will be operated by Mendes GoCar Ltd. under the brand name GoCar – Cambio Ireland. Interestingly, they refer to the service as "carsharing" and not a "car club" as they do in Great Britain.

The operation will launch with 6 Ford Fiestas, a Ford Focus and a Ford Transit Connect van at 3 "Go Bases". Ford was selected because of a long association with the company, according to the press release, which had a factory there until 1984. Rates will be €5 - 6 per hour and €0.30 - 0.40 per kilometer. There is a refundable deposit of €200 and a monthly fee of €7 per customer (€3 per additional driver).

The new company will be taking advantage of the service provided by Cambio and the experience of Cambio members in Germany and Belgium. GoCar will use Invers technology and the Cambio web and reservation system.

The service is being operated as part of the Cork City Integrated Sustainable Transport System. Free on-street parking spaces have been allocated. "Corkonians are going to be ahead of the pack. Operations of this new CarSharing service will commence in Cork on the 4th July, followed later by Dublin and other cities," according to Graham Lightfoot, managing director of the new service.
'
That name may be familiar to old timers, since Lightfoot was the author of Pay As Your Drive Carsharing report for the EU. He was involved with an effort to form a carsharing cooperative in Dublin in the mid-1990s. More recently Lightfoot was the head of the Irish Community Transport Association and he and others organized a high profile conference (pdf) last September to lay the groundwork for the current launch.

The city of Cork has already signed up for 3 vehicles so they off to a good start. Best wishes to a new a service in a new country. Congratulations to Graham Lightfoot for his persistence over the years and to Joachim Schwarz at Cambio for making this happen.
Posted by Dave at 4:50 PM