Sixt Car Rental Gets into Carsharing in Berlin

Ever vigilant Bodo Schwieger of Team Red transportation consultancy tipped me off to really big news out of Germany: Sixt Rent A Car, an international car rental company, is getting into carsharing. And they're starting in one of the ripest plums of Europe — Berlin — going up against the major Dutch carsharing company, Greenwheels, which took over ailing StattAuto several years ago. It is expected to the first of many cities in which Sixti will provide car club services.

As reported in Börse Online, the Sixti Car Club, operating under the brand of Sixt's low cost car rental service, will launch on Wednesday with 100 cars at 8 locations in the center of Berlin. 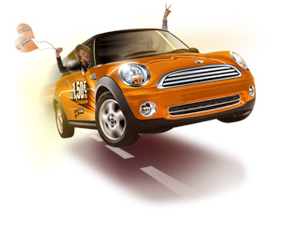 Vehicles types will be Smarts, Mercedes B-class and, of course, the ever popular darling vehicle of carsharing - the Mini, showing 4 vehicle classes. The early information indicates that members can book cars via the web or "handy" (cell phone) and that they will be able to unlock the cars using a code text messaged to their phone (the website FAQ doesn't mention this feature).

The Börse article states that Sixt will also be join to the German Federal Association of Carsharing, which presently has 80 members with over 3000 vehicles.

Sixt, based in Munich, has been an innovator for years. The were a pioneer in automated key dispensers for business travelers, with machines similar to ATM for check out and check in at all major European airports and many German train stations. Then they started a low-cost subsidiary, Sixti, that advertises vehicles "starting at 9.99 €" a day. Sixti has 92 locations in 9 countries. The Börse article says that 56% of Sixt's rental come from business rentals.

They're not the only car rental company operating carsharing in Europe, but likely to soon be the largest: in Austria Denzel Car Rental operated carsharing in several cities (but recently spun off the operation into a partnership with with Mobility Carsharing Switzerland); the Hertz franchisee operates carsharing under the Hertz name in Denmark and Avis partnered with Vinci Parking Company to create Okigo in Paris.

Sixti has produced a nice intro video (in German) to their service that has a cute opening.
Posted by Dave at 8:04 PM