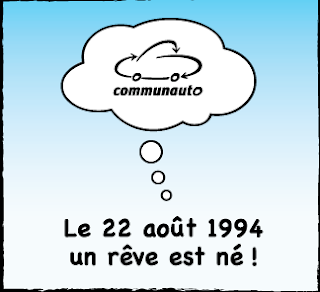 I was reminded recently how easy it is to lose sight that a lot of what happens in North America happens in Canada. Oh, ya, those guys up there.

Communauto has been growing for 15 years - 5 years longer than any of us Gringos "south of the border". It was founded by Benoît Robert and his collaborators in 1994. Now Communauto serves over 20 000 members, has a fleet over 1000 self-serve vehicles, divided throughout 310 parking stations in the greater regions of Quebec City, Montreal, Sherbrooke and Gatineau.

CommunAuto has always done things its own way: started as a school project in 1994, it was a nonprofit with 6 vehicles - 4 Pontiac Fireflies and 2 Ford Festivas. In 1997 Benoit took the company private merging operations in Quebec City and Montreal. (Here's a link to an English translation of his the original market research and a short history of the company in French.) It has unique rate plans not copied from anyone - charging the highest monthly fees and lowest per hour rates of any carshare, anywhere - as low as $1.60 per hour on Monday, Tuesday, Wednesday.

And CommunAuto has traditional kept its vehicles in service much longer than other carshares, up to 5 years at one point, giving them much better cost structure.

Something else CommunAuto has done that very few others have is a detailed analysis of greenhouse gas reduction from their operations. Completed in February 2007, the consulting firm of Tecsult estimates that as a result of carsharing each CommunAuto member has reduced their CO2 production by 1.2 tons per year. Tecsult estimates that if the market potential of carsharing was attained, this service alone would lead to a reduction of CO2 emissions equivalent to 5.6 times the reduction targeted for alternative modes of transportation by the 2006-2012 Action Plan – Quebec, all without any costs for the taxpayer. These numbers reflect the fact that almost 90% of CommunAuto member households are car free, much higher that 30-40% typical in the US.

To jump start the 15th anniversary, Communauto organized a photo event on September 5th to make the short film (above) demonstrating the advantages of car sharing in our cities. In October close to 150 people attended a celebration hosted at Montreal’s City Hall with partners, elected representatives and long-lasting users of Communauto’s services revisited the company’s most memorable moments.

Beyond being a role model for many car sharing organizations in North America, Communauto participated in developing a code of ethics subscribed to by many carsharing organizations. On the operation front they have developed partnerships with public transit and taxi companies and, put a lot of effort into integrating Smart electric vehicles in its car fleet, including a recent partnership with Veolia and an earlier project Branché around 2000). Below is a chart of their growth up to 10,000 members.