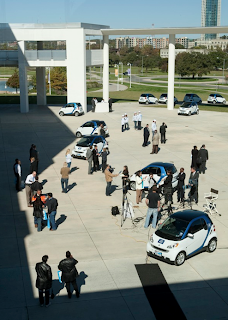 In what seems like an unlikely place to launch a new mobility service, Daimler AG chose Austin, Texas, as the site for initial foray into North America. I say unlikely because, as urban and green and uncharacteristic of Texas as Austin is, it's got a long way to go before it matches the land use patterns and car-lite development of other "classic" carsharing cities.

And launch they have: 200 vehicles all over the downtown area. (Full disclosure: through my association with Team Red mobility network, I consulted with car2Go during the early days of the Austin project.)

When I asked them about this, Daimler officials half jokingly replied that if they can make it work in Austin it can work anywhere. And they're probably right, too. Because Car2Go is really quite different from other carsharing services. It has taken me a long time to wrap my head around the mobility and transportation implications of the Car2Go service model.

What is the "next big thing" about Car2Go? Basically, this:

Car2Go Austin rates are 35¢ per minute - perfect for one-way trips - and are discounted for longer uses: $12.99 an hour or $65.99 for a full day. That means if your trip is longer than 37 minutes the hourly rate kicks in or trips longer 5 hour the daily rate kicks in. Vehicles are geo-fenced and cannot be taken more than 200 miles from Austin. 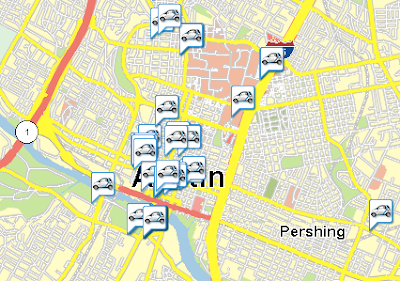 I'm assuming that the majority of trips are likely to be spontaneous but the system does allows members to reserve vehicles up to 24 hours or as little as 15 minutes in advance. They do not allow more than 5 reservations in a 24 hour period and they must be separated by at least 30 minutes. A vehicle cannot be rented for more than 30 days. Reservations can be cancelled as little as 15 minutes before the trip start without charge.

As with other carsharing companies, car2go maintenance staff will clean vehicles but unlike traditional carsharing, the staff will also refuel vehicles as needed. Fuel cards are provided for a member on a long trip to refuel the vehicle and, as with other carshares, member are not supposed to return a vehicle with less 1/4 tank. If they do refuel, 10 minutes deducted from the trip time.

As with Hertz Conect, car2go only provides state minimum liability insurance assuming that most users will have their own personal auto insurance coverage. This is something I have ranted against in past postings as it undercuts the attractiveness of using the service as an alternative to car ownership. Having said that, I think it illustrates the different concept that Daimler has in mind for car2go.

Take a moment (actually 4 minutes) and watch the way car2go describes itself: