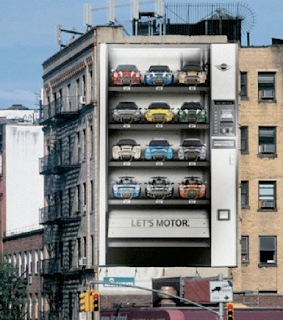 BMW Mini has always had very creative marketing. And they've had to - building a small car in an age of much larger ones - and with a (more or less) one model line-up. From the early series of numbered slogans emphasizing the fun and virtues of driving a small car to a very clever Mini on a stand with a coin slot, as if it were a child's horseback ride in a supermarket. They've usually had just the right balance of humor and positioning that I admired and advocated.

Now here's another clever idea, and another one that carshares (with a bit of budget) could use to promote new vehicle locations - placing a VERY large cardboard box with the image of the vehicle on the side.  The Mini "box" is set up as if it were a present that had just been opened.

What a perfect way to announce a new carsharing vehicle location - that is, before you have a vehicle to go there!

This Mini promotion is from the Netherlands but apparently, it's taken from an earlier RATP Metro promotion in Paris. 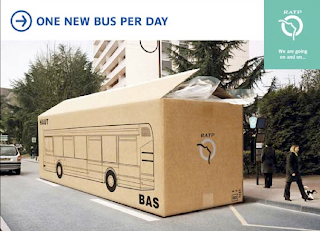 These ideas are from an interesting blog Creative Criminals, which also has a link to a YouTube video of the Mini box.  Thanks for sharing.
Posted by Dave at 8:57 AM