Free is a very good price if you want to get people to try your product!  And free certainly helped Daimler's innovative car2go personal mobility service in Austin, Texas, to 10,000 members in less than a year.

The Austin Business Journal article reports that about 50% of members are between 18 - 35 years old.  So these membership numbers are all the more impressive since there has not been major the exposure to the University of Texas students until this fall. 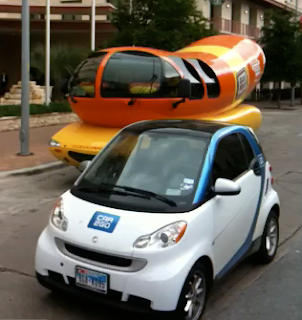 Membership growth rates could change somewhat since car2go will soon charge $35 to join, at least that's the pitch when this was written.   But car2go on Twitter and other buzz, such as their active sponsorship of local bands, will certainly help maintain the momentum.

The Austin Business Journal reports that 80,000 trips have occurred since the beginning of the year with the average trip between 30-60 minutes.

Daimler reported 235,000 trips during the first year in their Ulm, Germany, car2go pilot (although I believe there were somewhat more vehicles in operation).  Membership is now 19€ for the Ulm program - about $26 - but one suspects there are on-going promotional deals available there, as well.  Usage rates in Ulm are significantly lower - about 26¢/min. but a little more expensive per hour - $13.60/hr. - at current exchange rates.

A reminder about the basic operating parameters of car2go:
In addition to much greater trip flexibility, there are some operational differences compared to traditional carsharing.  For example, although you can make a reservation, it's not for a specific vehicle (which might not be at the location it was when you made the reservation) but for the nearest vehicle to the point you specified (which, in theory, could be very close or some distance away).

The service operates under a special pilot program arrangement with the City of Austin, allowing free parking at downtown parking meters and some parking lots in return for free use by city employees.  An earlier Austin Business Journal report valued the barter deal at $85,000.  The current pilot arrangement expires in November of this year.  Here's a map of the floating parking zone in Austin.  For reference, it takes 15-20 minutes to drive from the north end of the zone to the south end.

Since the number of non-car owning households in Austin is low, as is transit use, it's likely that car2go is displacing other types of trips.  We'll very curious to see what the travel mode shifts are, which we're told, is in the works.  And if we ever see such a study for Ulm, we'll keep you posted, as well.
Posted by Dave at 2:00 PM