AAA has released the 2010 edition of Your Driving Costs and not surprisingly, it isn't getting any cheaper to own a car. 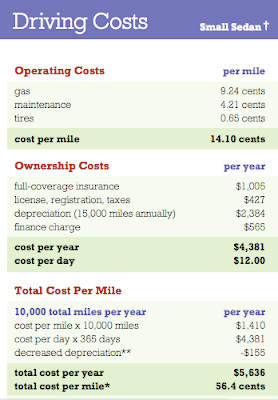 Even for a small sedan, direct operating cost are over 14¢ per mile and when depreciation, insurance and other costs of ownership are included, the cost per mile is over 56¢ per mile when factored over 10,000 per year.  Larger vehicles cost over 90¢ per mile when driving 10,000 miles per year.  (Gasoline was calculated at $2.63/gal.)

As I have suggested before, I don't think that most prospective carsharing customers are really comparing the cost of a new car (which AAA assumes) but, still, these numbers are a useful reminder that mobility comes with a price tag.  And they certainly ought to motivate vehicle owners to consider recouping some of their costs by listing their vehicle with a P2P carsharing service — RelayRides, GetAround, Spride or CommunAuto (in Montreal).

Robin Chase, who has a keen interest in this topic recently posted some interesting data showing how different the cost of car ownership was in different cities.  Her data source was actual reported costs from people all over the country as stored on the Mint.com budget tracking web site.  Thanks, Robin.
Posted by Dave at 11:37 AM