In Germany, Autoflotte Online passes on the good news about carsharing from the German carsharing association, Bundesverband Carsharing (BCS): 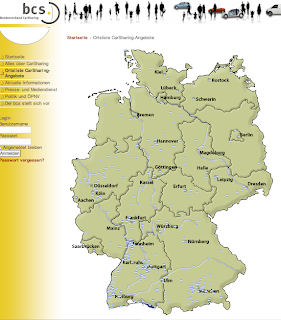 Mirroring the trend in the US, carsharing membership in Germany grew by of 20.3% from the previous year to 190,000. High growth was reported in the larger cities while membership in smaller carsharing companies (less than 20 vehicles) grew about 15% in 2010.

As of the end of 2010 there were 128 (!) carsharing companies in Germany operating about 5,000 vehicles, an increase of 400 vehicles for the year, or about 8.7% These vehicles were at 2,400 stations - an increase of 9.1% locations (remember, Germany still does not officially allow on-street parking of carsharing vehicles).  The BCS continues to press for a change in German federal law to make on-street parking possible outside of the few pilot projects.

Other big carsharing news from Germany - car2go's expansion to Hamburg - will be covered in a separate post. 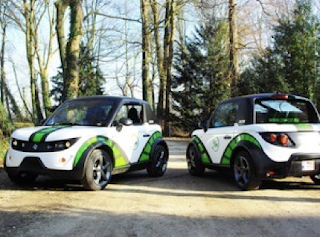 The interest in electric vehicle extends to Europe, as well.   In November Cambio carsharing, in partnership with Greenpeace, introduced several Mitsubishi iMiev vehicles in the Hamburg fleet. Cambio is charging 2.80 € per hour + 17 cents per kilometer. They are requiring members wanting to drive the EVs to attend a special driving school.

And Drive Carsharing added some 3 wheel electric vehicles in a project with German telematics provider Wollnikom according to AutoFlotte Online.

And in Brussels, Belgium, Zen Car launched as an all electric carsharing fleet.  Initially, 29 cars will be at 15 locations.  Rates are set at 7 € per hour with no distance charge (smart move!)   Zen Car is funded by Société Régionale d'Investissement de Bruxelles.

Carsharing "Embryonic but Promising" in France

Meanwhile in France, market research company Groupe Xerfi calls Autopartage "embryonic but promising".   Their report says that French carsharing companies grossed €12.5 million from about 25,000 members and predicted that membership could reach 140,000 members by 2015 with revenues at least 6 times greater.   According to France Autopartage, currently, there are 17 carsharing companies in France, with 5 of them in Paris.

Xerfi says the growth of carsharing in France has been "modest", behind some other countries, but point point to the Paris Autolib program (and general government leadership in the area), as well as interest from major companies like Veolia Transportation, Vinci parking and Hertz Connect (now with an estimated 3,000 subscribers in Paris after two years of operation).  Still, they caution that carsharing is struggling to find a viable economic model (sounds like some other carsharing companies I know).  You can read the full Xerfi report for a mere 1,500 € (and if you do, tell me more...)
Posted by Dave at 3:27 PM