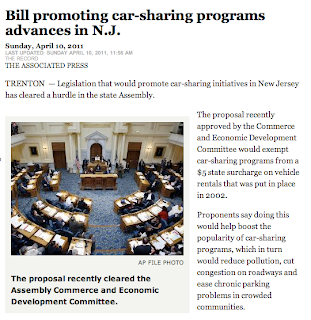 A (hopefully) low-profile bill is passing through the New Jersey legislature that would exempt carsharing from the $5 per trip rental car tax, according to the Associated Press.

The measure is sponsored by Ruben Ramos Jr., D-Hoboken, and will certainly help that city's Corner Cars program (operated by Connect by Hertz), as well as Zipcar members in the Garden State.

The idea of taxing carsharing like a rental car transaction doesn't go away because:


To most of us exempting carsharing from rental car taxes is a no brainer.  In most places, rental car taxes are dedicated to tourism and convention promotion, but carsharing is primarily a mobility option for local residents.  So, on the most fundamental level, why would you tax something you want more of?  Yet, it's an issue that doesn't seem to go away and one that is probably going to have to be resolved on a state by state and possibly even, city by city basis.

New Jersey isn't the first place to struggle with this issue: Flexcar in Washington State also faced the issue a couple of years ago.  The state decided that some longer trips made in carsharing vehicles looked an awful lot like car rental trips and not like than the classic 4-5 hour around town carsharing trip.  Yes, some trips taken by carsharing may be as long as a car rental trip but, to me, if you just had to tax something, I'd base the distinction on whether the trip was they taken by people from out of the area or not (which Washington officials said was too difficult!)

Word to the wise: if your carshare isn't exempt from rental car taxes, why not?  It won't happen overnight but doesn't take that much time or effort.  Start by finding an advocate in the appropriate level of government (that the tax is levied at) to introduce legislation.  You'll have all sorts of supporters and few detractors.  Just be ready for one of the car rental giants to show up at the hearings claiming that car rental is "just like carsharing" (as they have done in Chicago) and should be entitled to the same benefit.  NOT! (until they show that they deliver the same benefits to society).

If you're wonky on the subject, the Tax Foundation posted this informed discussion about rental car taxation.  Thanks to RelayRides for Tweeting the link to this article the other day.
Posted by Dave at 1:29 PM