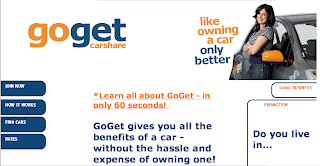 While I was finishing up my previous post about new service models, I got a tantalizing call from Nic Lowe of GoGet Carsharing, serving Sydney, Melbourne, Adelaide, and soon Brisbane, Australia.  What he had to tell me surprised and amazed me - they're doing a test of exactly the services I had been writing about:
They call it GoFree and it's very nicely thought out.  It's designed to answer to concern that every carshare member has had at one time or another - avoiding penalties for late return.   GoGet thinks it will be particularly appealing to business users but I think it will get plenty of use on evenings and weekends, as well.  Members can still reserve a regular GoGet vehicles in advance.

How are they implementing it?  Right now only selected members are being invited to test the system.  Certain vehicles at several pods are designated as GoFree vehicles.  To use a vehicle the member swipes their card over the reader but instead of opening the door it sends the member an SMS (text) message to verify they want to start a trip.  Responding to the message unlocks the door.   At the end of the trip, the member uses their card to re-lock the doors and sends a text message to GoGet with the word FIN to end the trip.

The trip is billed at a rate of about 8.5¢ per minute + GoGet's standard $0.35 kilometer rate, similar to GoFrequent hourly rate (Australian and US dollars are approximately the same).  Members still have fill up the gas tank if it gets lower 1/4 during their trip and they do have to return the vehicle to same station.


It's a refreshing reminder to see this kind of innovation, not from a giant multinational corporation, but an independent.   One of the reasons GoGet can test such a concept out is they've developed their own in-vehicle computer and scheduling software, which they market for fleet management purposes under the name Fleetcutter.  GoGet was started in 2002 by Nic Lowe and Bruce Jeffreys and since then they've been keeping their eye on the ball and have expanded to over 500 vehicles.
I think providing on-demand and open-ended trips makes the convenience of carsharing about as close to car ownership as I can imagine.  The lack of one-way option (either between stations or floating parking) doesn't seem like a huge disadvantage to me.   Like a lot of things in business (and life) implementing "mobility on demand" looks pretty simple, but getting all the details to fit together so that it works for the customer is hard work.