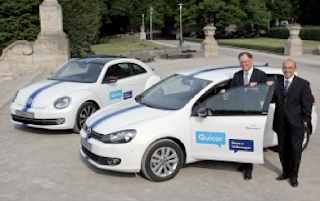 Another car manu-
facturer is starting a carsharing service, this time it's a full-line company, Volks-
wagen, not a luxury brand, like Daimler or BMW.
The service will be called "Quicar" - presumably a sort of pun on Quick Car and "quicker" - and is slated to launch in the fall of 2011 in Hannover, Germany.  The slogan for the service is "Share a Volkswagen" so they are tying the service close to their brand.
The initial press release says the service will feature 200 VW "Blue Motion" Golf vehicles, initially at 50 parking locations around the city.  In the future other VW vehicles, such as their small van - the "Caddy" (not sold in the US) and presumably the just announced new-new Beetle (an old "new Beetle" is shown in the publicity photograph above) could be added.

The announcement says that in the "medium term", Quicar may expand to as many as 100 parking locations in Hannover.  Hannover is a city of 520,000 people in north central Germany.  It is a major trade center and has four universities, as well.
The press release indicates that member sign ups will be handled at "shops across the city".

Quicar faces competition from 19 year old Stadtmobil Hannover, currently with 140 vehicles serving 3,500 members in the area, as well as a few cars at the train station from DB Carsharing, operated by the German railroad system.
Quicar telematics are being designed by VW from scratch and will include a touchscreen providing carsharing access and navigation.  And of course, they'll be offering an "app" for smart phone users.  The initial press release indicates that customer will be able to use an SD memory card to store individual destinations/routes, as well as music.
The VW Blue Motion Golf is very fuel efficient diesel rated 3.8 liters per 100 kilometers - or about 60 mpg - with very low GHG impact.  It achieves this using the auto-stop feature at stop signs and regenerative braking.

There's little detail in the initial press release about VW future expansion plans to other cities.  It makes sense that car manufacturers in Europe are ready to experiment with carsharing before those in the US - most importantly, public transport infrastructure is much better developed there, enabling a greater percentage of people there to live without a car.  And presumably the same trend seen in the US and UK of a greater number of the younger generation postponing car ownership and using smart phones, bicycles and public transport applies to Germany, as well.
Team Red GmbH, with which I'm affiliated, had the pleasure to assist VW in the development of this service.
Posted by Dave at 1:32 PM