France is the capital of P2P carsharing

I must admit, reading this article "Car sharing: from mobility service to service of mobility" (in rough English translation here) in Le Blog de la Consommation Collaborative, I was more than a little surprised to learn that there are 8 P2P carsharing and car rental (important distinction, but still...) companies in France!  Where have I been?  What do the French know that we don't?


Surprisingly, 3 (!) of these P2P companies are non-profits really emphasizing the collaborative consumption approach to carsharing:
My sense has been that for years, French carsharing has seemed to languish somewhat — a number of services in regional cities of France, but all relatively small, in spite of the involvement by some major players (e.g. Veolia).  That was then...
But now entrepreneurs in France has certainly demonstrated their stuff with eight P2Ps, not to mention the Autolib statement — doing something on a scale not even attempted by Zipcar in New York City — and with battery EVs not less.
If you're interested in a sense of the French collaborative consumption perspective on P2P, as well as the formation of Voiturelib (a student project), here's an interesting interview with the founders of DeWays discussing their motivations, the issue of insurance (in France, at least)  G-translated.
Finally, if you've wondered why European car manufacturers are creating carsharing subsidiaries, this chart (also from the blog article) give a hint of one reason - car sales in the EU and in France are way down.   In such a situation it makes sense to look around for new markets in the mobility sector. (France must have had one heck of an auto scrap incentive in 2008 to boost auto sales the way they did). 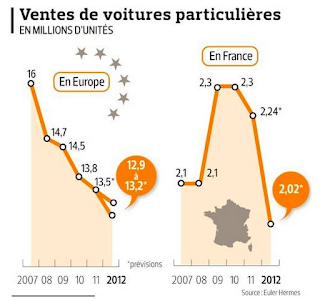