Here are some thoughts about the state of carsharing in 2012 and look ahead. 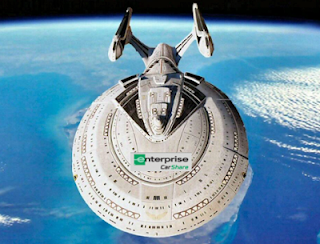 Carship Enterprise In the big news department, nothing is bigger (and probably under-reported) than Enterprise bringing its carsharing operations — Philly CarShare, Mint and WeCar — under one umbrella Enterprise Carshare.   They are have quietly become a major player serving 3 cities (OK, 2 1/2 since their Boston operation isn't huge, yet), more than 60 colleges and universities and several military bases (a market mostly untapped since Flexcar tried to enter it in the early 'aughts (2000's).

Star Trek's tag line was "to boldly go where no man had gone before", and I would say, Enterprise has been fairly bold since they are already in the "neighborhood" space (they invented it) with their existing rental car outlets.  I suspect both carsharing and rental car industries are watching Enterprise closely to see its next move.  Will they start rolling out city-wide operations in a number of cities, as well as continue their college and university expansion?

Zipcar made a solid profit in the 3rd quarter 2012 and looks like they'll continue in 4th quarter and beyond.  Hooray!   May they have put this chapter behind them!  Zip is the flagship in the industry but has been struggling to make investors (and itself) happy ever since its IPO.  It's worth reminding ourselves just how BIG Zipcar is — when ranked against car rental companies they were 5th behind Dollar/Thrifty, according to Auto Rental News annual compilation.  (And they did it without the major revenue stream of remarketing their vehicles that the auto rental companies have!) 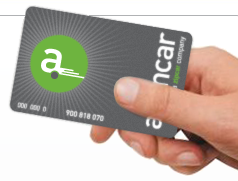 With the rebranding of Avancar, it appears they've learned something about bringing new acquisitions into the fold — don't throw the baby out with the bathwater.  IMHO Zipcar lost lots of goodwill when it lost the Streetcar name in London.  It's too early to say whether the continued slow(er) growth in car club memberships there is the result of this rebranding or an overall slowdown in the London car club dynamics.  And hopefully, they'll get over their hiccup in Vienna, as well.

P2P In the not so big news, the P2P companies in the US continue to march forward, although it's somewhat difficult to tell how fast they're marching, how many people or vehicles are enrolled in their services and how much usage the vehicles are actually getting.  As I've said before, without technology in the car, these guys aren't really carsharing - but car rental!  (And that's fine, see my comments in the following section.)

Meanwhile, the "little guy" carshares in the US and Canada (many more up there, eh what?), continue to do a great job serving their customers, at generally much lower rates.  And over in Europe, multiple carsharing companies continue to slug it out in many cities, apparently with enough loyal customers, and usage, to keep them going for another year.

Fundamental Differences The bad news for 2013 is that, regrettably, the misunderstanding about several fundamental differences in carsharing service models will likely will continue and probably further muddy the waters.  I'm talking about the differences between
Right now the media (mainstream and blogosphere) are the chief perpetrators, with the investment reporters repeating the misinformation. Yes, these are all forms of carsharing, but they serve different types of trips and customers.

I will say it again: one way/on demand carsharing, such as car2go (the current darling of the media) is a fundamentally different service model than "classic" round trip carsharing.  The Motley Fool, a sometimes confused observer of the carsharing scene, even predicts Zipcar will offer one way service in 2013.  Perhaps so, but it will likely be more like Hertz On Demand's one way option to the NYC airports and probably not the full one-way service like car2go.  Could Zipcar do it? Of course they could (after a not insignicant rewrite of their back end software).  But will they?  Time will tell.
Plug and Play The good news is that I expect 2013 will show us the first fully, or almost fully "plug and play" carsharing telematics.  Some of the P2P carshare boxes in Europe and US approach this but given the interest in telematics by the OEMs (car manufacturers), the rental car industry (we're still waiting to see what Hertz is going to do) and the ever growing worldwide carsharing industry, I think it's inevitable.

Shake Out in P2P  And speaking of Europe, There are so many P2P companies currently operating there, I can't imagine there won't be some sort shake out in the German, and especially French, P2P carshare markets.    And perhaps something could shift in the US, as well.   And something else in P2P that seems overdue is when Wheelz is going to make a major move.  But exactly what, where, why, when, remains to be seen.

Real Data About P2P and One Way  Hopefully, in 2013 I'm looking forward to seeing at least some preliminary results from two large-scale federally-funded studies about carsharing in the US:
The impacts of both these business models are likely to be very different from classic carsharing and it does the industry a disservice to confuse them.

Berlin Something else I'll be watching closely in 2013 is Berlin, Germany.  It's a huge, somewhat spread out, city, that's got 5 "classic carshares, 3 one way/on demand and 3+ P2P carshares — all in one city!  Some day (hopefully soon) some bright university professor will study how people make decisions about which carshare to join in Berlin, the same way Detroit has been studying consumers for years!  In the meantime here's a comparison (in broken English) of the prices of most of these services in Berlin.

I'm sure there's more news that I haven't mentioned, so feel free to comment below.

May we have even more mobility choices in 2013.   Happy new year!