What do we know about the benefits of new forms of carsharing?

I love Car2Go - I love the idea of it; I think it's a beautifully designed and implemented system; and, as a member, I find the service very handy and use it a couple of times each month in Portland.

And I love the idea of peer-to-peer carsharing, too - efficiently using idle resources, providing a mobility option, increasing neighborliness and all that.

But I've got a complaint - these new services shouldn't try to take credit for stuff that doesn't apply to you.

Here's a slide from the presentation car2go gave to the Seattle City Council recently: 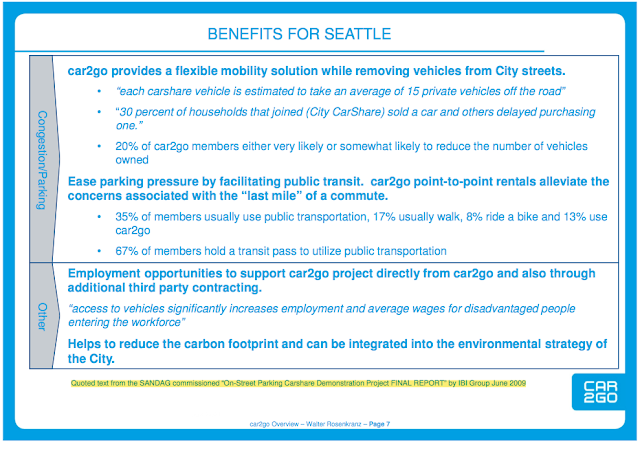 All these benefits sound great, don't they?  If I were a city council-person watching the car2go pitch or a prospective member of Getaround and didn't know better, I'd say, wow, this is a really impressive, sign me up.  The only problem is those wonderful numbers about vehicles taken off the road, vehicles sold or delayed purchasing don't come from studies about car2go or Getaround but from detailed studies about classic round-trip carsharing with access technology installed in each vehicle.

"Classic" carsharing is conceived of as an alternative to owning a car, or a second car, so it's not surprising that people in these services have been shown through extensive evaluations to be shedding cars.  Peer to peer carsharing with key exchange is a lot more like car rental than carsharing and does not approach the level of convenience that I think would induce nearly as many people to reduce the number of cars they own.

In the case of car2go, while a small percentage of trips certainly overlap with traditional carsharing services, it's clear from car2go's own numbers that the majority of trips are one way, something that can't be done with City Carshare (or Zipcar), which is what the numbers that are quoted apply to.  The rapid growth of car2go membership in every city is not just because of the free memberships in each city is an indication that a big percentage of people it appeals to probably aren't interested in round trip carsharing at the present.  car2go has the further distinction in offering only the 2-seater Smart car, which further differentiates the types of trips that users might make compared to round-trip carsharing.

If you don't think there's confusion about the different types of carsharing, a recent Seattle Times article about car2go shows it - the reporter spoke to Frost and Sullivan spokespeson Stephen Spivey who is quoted saying that carsharing "replaces between nine and 13 cars on the road, cutting congestion and carbon emissions."  Well, ya, round trip carsharing does, but we just don't know whether this is anywhere close to the impact of car2go?  The reporter didn't make the distinction and it's unlikely that any of the Seattle City Council did either.

And it's not just in Seattle, there are numerous examples of the media in both North America and Europe regularly attributes the benefits of round trip carsharing to one-way/on-demand services, such as car2go.

Don't get me wrong

I think one-way/on-demand services, as well as peer to peer carsharing services with "key swap", will have a positive impacts on cities.  And in the long run these could be significant impacts.  But right now we just don't know what the impacts are and it annoys me that these claims are being made citing inappropriate data.

The good news is that studies on the impacts of one-way/on-demand services are finally getting underway in San Diego by Dr. Susan Shaheen and in Munich by team red Deutschland.  Getaround will be the subject of its own federally-funded study in Portland, now underway.

So please, don't claim the others guys' benefits as your own.  You'll have your own numbers soon.  Thank you.

At least car2go cited the source of its claims (highlighted in yellow in the slide above).