Mobility on Demand is Getting Closer to Reality

I first heard about the concept of mobility on demand from Dan Sturges several years ago, but it's been promoted by other people and groups, as well — MIT Media Labs, to name one.  Typically, a "mobility on demand" system would consist of a network of lightweight 1-2 passenger vehicles, typically electric, usually operating between (recharging) stations.  The concept, as Dan likes to explain it, is that the MOD system is your "near car" and a more classic carsharing or car rental could serve as your "far car", if a train or bus option wasn't available. 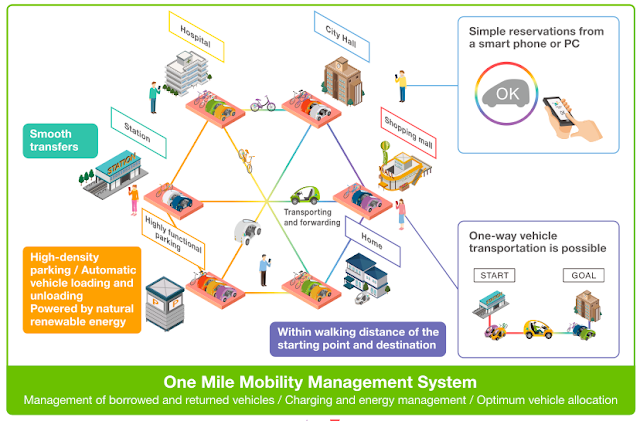 Recently, Toyota has unveiled a very cool new vehicle, the 3-wheel, tilting i-Road, and announced it will be included in a mobility on demand demonstration project in Grenoble, France. The project will also include the far less sexy, non tilting COM vehicle (right).

The Grenoble project will be a collaboration with the city of Grenoble-Alps Metropole, the existing carsharing company CitéLib' (which will manage the system), the national electric provider, EDF (providing charging), and Toyota Motor Corp.

Here's a cool video of the i-Road in action.

The i-Road is a "lean machine" as one website put it.


Toyota will manage the system using their "One Mile Mobility Management System" announced at the ITS World Congress (see graphic above) and described here (PDF).   Toyota Global seems to be good at coming up with names, and they say that the One Mile Mobility Management system is part of their Ha:Mo Ride system, short for "Harmonious Mobility".  The other part of Ha:Mo is Ha:mo Navi, providing options for using both public and private modes. Here's a description of Ha:Mo from Autoblog Green.  If you enjoy the work of Japanese animé filmmaker Hayao Miyazaki, you'll enjoy this promotional video Studio Ghibli produced about Ha:Mo.

Renault, developer of the Twizy has been testing the Twizy in a mobility on demand system in a suburb outside of Paris for the past year, but so far, reporting on any results from the project are scarce.  Nevertheless Renault has announced the Twizy will be part of a more traditional roundtrip EV-carsharing project launching in Germany under the name Ruhrauto-E at the end of this month (March) in Essen, Boltrop and Bochum.  According to Auto-presse.de this project is a partnership of University of Duisburg-Essen (UDE), the Rhine-Ruhr transport group (VRR), Viva West Housing Ltd. and the Drive-Carsharing Ltd.

Toyota isn't the only OEM working on mobility on demand.  General Motors has shown a similar sized vehicle, the EN-V, and there have been news reports of a possible demonstration project using this vehicle in China.

We will be watching these mobility on demand systems with interest.
Posted by Dave at 1:56 PM