Is Car2Go Black the next chapter of carsharing?

(This was originally published in February 2014, but I've extensively updated it.)

From about day 2 after the initial launch in of Car2Go in Ulm, Germany people have been wondering if/when/whether Daimler would ever to include one of their larger vehicles in the car2go fleet?  Well, they did in February 2014 — Car2Go Black — in Berlin and Hamburg with 100 Mercedes B-Class vehicles.  Now it's got locations in 8 cities in Germany. 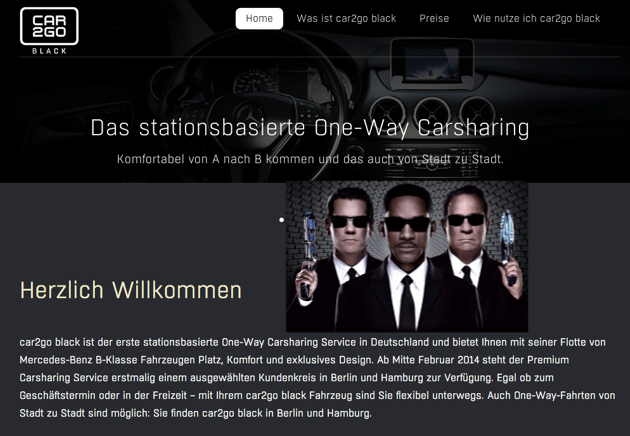 (The Men In Black juxtaposition is mine, not Daimler's.)

it appears they're doing it with the same flair and originality that marked the first Car2Go.  They could have easily and simply seeded a city fleet with 20-30 B-class sedans and let them float around the city and called it good, but they didn't.

Instead, it appears they've given a lot of thought about how to provide a flexible, convenient service.  They decided to place these "black" vehicles in several strategic locations around a city and let the customers come to them (I'm sure they're hoping it will be in a Car2Go Smart).  Black vehicles can be unlocked via RFID card of smartphone app.  The key is in the glove box, not on the dashboard as in the Smart cars.

Reservations are required and They system allows one-way trips between Car2go Black cities but the destination must be specified at the time of reservation.  Reservations can be made for up to 14 days, with trip start and ends in 15 minute increments.

Car2Go Black pricing (PDF) is a model of simplicity and seems competitive with the car rental service it is — (as of April 2015) 14.90 € per hour including 50 kilometers per trip with additional distance at 0.29 € per km. or 89€ per day, including 200 km/day and same price for additional km.  For cities with airport locations, there's a 4.90€ additional fee.  Locating, unlocking and billing will be through the Daimler Moovel app. 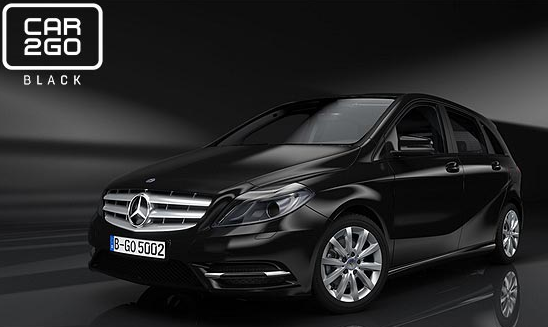 I think Daimler has come up with a very clever compliment to its original Smart Car2Go system.  And should be pretty efficient to operate, as well, given that it's basically a largely unattended car rental service.

They may not know it, but Car2Go has pretty much implemented mobility guru Dan Sturges' ideas of "near cars" (Car2Go Smart) and "far cars" (Car2Go Black) as a complete urban automobility solution.

And Car2Go Black already has a ready pool of thousands of existing customers signed up and in their system - credit cards and all!  From an OEM's point of view Car2Go Black could be to be a great way for Car2Go customers to try out the "move up" B-Class model, just in case they're is in the market for a new car! (I don't know about whether this was done in Europe, but Car2Go in the USA did a member promotion offering a discount on the purchase of a new Smart car a couple months ago.)

So, around town, Car2Go Black will be a premium car rental.  But 14.90 € per hour (the same price as Car2Go Smart cars) is quite a bit more expensive than what other carshares charge for their most luxurious vehicles (not Mercedes, admittedly) and is similar to DriveNow's hourly rate for Mini Coopers and BMW 1-series.  However, Avis would be glad to rent you a B-class for around town use in Berlin or Hamburg for a similar price, but which wouldn't include fuel or insurance (but would be a lot more if you wanted one-way trip between cities).

A trip from Berlin to Hamburg would be about 120 € in a Car2Go Black (assuming the Autobahn cooperated), which is about what a high speed train trip for 1 person without a discount card would cost (in fairness, the train makes the trip about 50% faster).  How often the one-way between cities option will get used is anyone's guess. And it's worth nothing that the one-way between cities is not original with Car2Go — a similar one-way option to travel between cities is already offered by DriveNow between Köln and Dusseldorf.

As with all flavors of carsharing: Customer Convenience = Car Utilization.  And how convenient this station-based carsharing will be depends at least somewhat on how convenient the parking / garage locations turn out to be.  Car2Go Black is a particularly good strategy for Daimler, since the Smart vehicle is such a specialized "city" car.  DriveNow, with it's more versatile fleet, can provide similar, if not greater convenience for longer, out of town trips with it's floating fleet vehicles.  Both approaches have pluses and minuses so it's really up to the customer!

As a reminder about the bigger picture, Car2Go isn't the only trick up Daimler Innovation's sleeve.  They have made substantial moves into the ridesharing market as well.  In addition to their investment in Carsharing.com, they have invested in the trip planner app Moovel and now bundled their full suite of mobility services (from themselves and partner) under Moovel listed here (don't ask me why it show up under the Mercedes name).  Integrated mobility coming soon to a smartphone near you!

I know I'm not the only person who will be watching Car2Go Black closely.  Best of luck, meine Damen und Herren.