I saw it again: another article quoting a statistic of how much it costs to own a car!  You know, the one quoting AAA's calculations that it costs $9,000 per year.

I am so tired of seeing that statistic!  Not that's it wrong, mind you, but because I don't think quoting it (without some context) actually makes people more aware of the cost of car ownership. Let me explain why.

First of all, if you own a car, you're probably NOT spending $9,000 per year, and I think the chances are slim that you even know someone spending that much each year (unless they own a very fancy car and live in a big city with very expensive rented parking space). 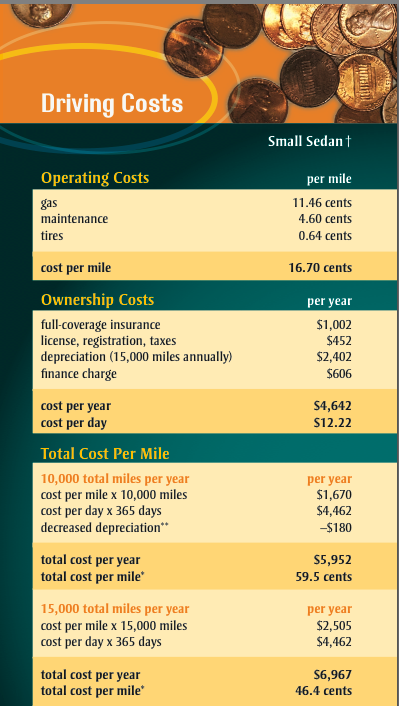 It's not that the $9,000 number isn't true - I think the AAA did their homework, since it matches up very closely with Intellichoice cost of ownership numbers.  But as the AAA chart (PDF) shows, it's only true for very high mileage drivers in new, medium size cars - and, I would argue, these people aren't the people likely to join and use carsharing.

I think the number that is more realistic to quote is the AAA number for a small sedan at a lower annual mileage of 10,000 miles per year - about $5,900 per year.  And these are big numbers:
So my second objection to the $9,000 per year price tag is that it probably doesn't apply to a big percentage of the prospective customers for round-trip, station-based carsharing.*  Remember these AAA numbers are for new cars and would apply to vehicles less than 5 years old.  But most of the cars on the road today aren't new and especially those owned by prospective carsharing members.  The average age of cars on the road is almost 11 years -  34% of all cars are between 6 and 10 years old and another 36% are older than 10 years.   I would suggest that probably 40-50% of the vehicles on the road would be considered fully amortized (no depreciation or finance charges in the AAA chart) - these owners are probably looking at operating costs in the 25¢ per mile range.

It well known that most people who own a car don't have a very clear ide of what their car is costing them.  So, they don't have a good reference point to compare carsharing rates to ownership.  The closest comparison might be cost of car rental, so carsharing may seem expensive, since most rental rates have a lot of hidden costs - fuel, insurance, inconvenience of renting, etc.  And, unless they are familiar with bicycling/walking/transit use, it can be difficult to imagine accomplishing much of one's life without a car parked out front.

Don't get me wrong, part of any marketing campaign for carsharing needs to include the cost of ownership comparison.   But people make their decision to join carsharing based on many factors, one of which is cost comparison, but for most people the fundamental decision is a "value" question - "carsharing is convenient and less hassle and I get to drive to drive a variety of cool cars."

So, let's get out there and tell the world how expensive car ownership is - but give them a believable number in a context they can relate to.

*  Although, the $9,000/year number might apply to a greater percentage of prospects for one-way/on-demand carsharing, they are probably interested in one-way service for the convenience aspects not the money-savings.)
Posted by Dave at 1:59 PM