One of the lessons I learned from watching the growth of bikesharing was the importance of thinking big.  At the time, bikesharing was already happening in several cities in France but Paris took it a whole new level - really big time - and in a city that wasn't particularly hospitable to bikes!

I suggest the "think big" approach to many of the start up carsharing clients I work with because starting cautiously often means that investors won't take you seriously when you come back for round 2, that local government partners don't believe you will have a noticeable impact on city transportation patterns and customers may think of you won't be around in a year or 2.

The City of Los Angeles and Shared Use Mobility Center weren't my clients but I've got to hand it to them - the long-awaited RFQ from the City of Los Angeles shows just how big they're thinking: $1 million in incentives including $600,000 for startup expenses to the carsharing company, almost $500,000 for marketing and outreach expenses.

The city's goal is 110 EVs, plug in hybrids (and even fuel cell vehicles) into a carsharing fleet - at least 80 must be battery EVs.  (I'll save you the trouble - that's $9,000 per carshare vehicle over 3 years.)   The city will provide 150 on-street charging stations, including some of the new street light pole chargers (it's unclear if any will be level 3 stations).

The service area is in specified neighborhoods (identified in the RFQ) that have a high percentage of low income households and affordable housing projects.  The project envisions, 7,000 members and removing 1,000 vehicles from the road by the end of the 3 year period.  It's part of the city's Sustainable City pLAn. 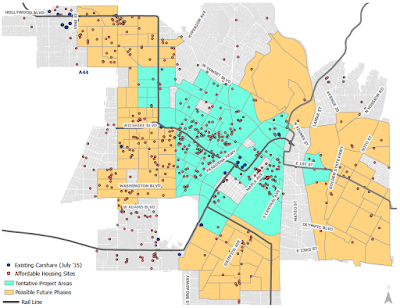 But there's reason for optimism, too. 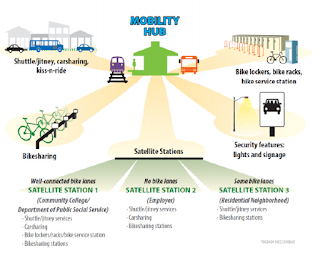 I expect the usual suspects - Zipcar and Enterprise - will likely respond to this RFQ (due Feb. 5). At the present time, Zipcar has about 100 vehicles in the LA area, many at universities, so they're a natural. And there are some other possible applicants, including Alliance Autogroup.  And it certainly wouldn't surprise me to see Ford and GM respond, as well.  No, I don't expect to see any Teslas in this fleet, but who knows?

Finally, I want to compliment the City for issuing an RFQ that's a model for specifying what you want but not telling companies how to do their job.  (Well, except for the part that the Advisory Committee will oversee marketing and street teams.)  And also for at least mentioning the issue that the contractor must provide usage data to the city planners.  (There is one thing I would have done differently: not specify the final number of cars you want to see at the project conclusion, even a minimum number - let the proposers tell you how many they're shooting for, and then fix that number in the final contract.)

Might there have been a better way to spend a million bucks promoting carsharing and affordable mobility in LA?  Perhaps.  But the decision has been made, it's well thought out and could make a difference.  I say, best of luck, LA!