Some thoughts about autonomous vehicles and the future of carsharing

Earlier this month I was a speaker at the Connected & Autonomous Vehicles Conference, part of the larger Internet of Things World Conference in Santa Clara, California, May 17, 2017.  I was on a panel discussion introducing shared mobility with Steve Messino, CEO of MuvMe, a carsharing/on demand car rental platform provider. 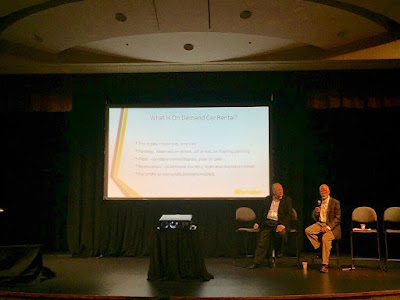 I'm skeptical about how fast the conversion to autonomous vehicles is going to happen, so I was interested to hear from a number of other speakers in the autonomous vehicle industry saying the same thing at other sessions.  There are all sorts of issues to be sorted out - highway regulations and insurance are two big ones and in the US.  And these issues will have be figured out on both the national and state by state levels, and probably some cities will want to regulate them, as well.

What did you learn about autonomous cars at the conference?

I've been skeptical about soon autononmous cars are going to become widespread.  I just saw one this morning saying it would be, "within 5 years".  Well, okay, maybe on certain highways, but not widespread.  It's not because of technology or availability of insurance, but because there are so many regulatory challenges to figure out, at least in North America — the federal government and each state have to implement laws, insurance commissioners in each state have to go through a process.  I don't see it happening on a widescale basis for at least 10 years.

Something that really surprised me, as much as I hate to admit it, is the awareness of carsharing at the conference was pretty low.  We are still more niche to the general public than we realize.  But everyone seems to know about Uber and Lyft and their ultimate plans to switch to autonomous cars.  It wasn't until after the conference I read this really wonderful quote from Gregory Ducongé, CEO of Vulog that would have helped people at the conference understand carsharing, "It's Uber without the driver, and it's much cheaper."

There was one whole session devoted to insuring self driving cars which I found very interesting because it reminded me of my own experiences in the early days of carsharing.   I don't see insurance as the challenge some of the speakers did.  Carsharing pioneers in every country face the challenge of finding an insurance company to provide coverage and AV pioneers will are facing the same thing.  But I think the experience of peer to peer carshare companies suggests that it might actually be easier for autonomous vehicle companies to get insurance because the scale of AVs is so much greater than a little carshare start up, and scale is what insurance companies are looking for to provide a cushion against big claims. It wouldn't surprise me if AV insurance had a pay-by-mile (or kilometer) component, as well!

In my talk, I reminded everyone that there's no difference between autonomous Uber and autonomous Zipcar - both will provide cars that come to your front door when you request them.  Uber and Lyft clearly have the advantage of a huge member based, but I wonder if Zipcar may have an easier time integrating self driving cars into their business model, since it's built on the idea of owning the fleet, whereas the ride-hailing companies have built their business model on using other peoples' cars.  The challenge for Uber to make the switch is big but hardly insurmountable if you have lots of cash!)

Perhaps the most fundamental insight about the future of autonomous vehicles didn't come from the conference at all but from an article several months ago in Atlantic Magazine's excellent CityLab website.  It said that AVs could lead to either a transportation "heaven" (if the AVs were shared) or "hell" (if privately owned) due to increased congestion and VMT.

Where is carsharing headed?

I've always been reluctant to make predictions beyond 5 years out.  There are so many uncertainties about technology and government policies that could take the industry in a radically different direction. Such changes might be a breakthrough in battery technology for electric vehicles or even the election of a new US President!  So, some things I see likely to happen in the next 5 years include:
I'm sure we'll see many other possibilities as the personal transportation sector is in huge ferment right now.

(Note: an earlier version of this interview was published in the May, 2017 edition of the Team Red Global Carsharing Update newsletter.)
Posted by Dave at 3:05 PM