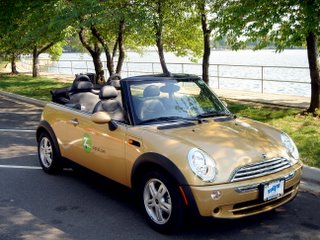 One of the first decisions a carshare faces is "what kind(s) of cars should we have?" It's one of those tantalizing questions that provokes endless discussion as we try to fathom the mind of our members and run an efficient operation. Should we have dazzling variety of vehicles like Zipcar, or a familiar few quality models, like Flexcar, or something in between?

So far most US carshares have stuck mostly with reliable Japanese vehicles, which are presumably also popular with their prospective customers. As appealing as VWs and BMWs may be, their reliability stinks. And nobody wants an irate call from a member in the middle of a trip. City Carshare and Zipcar, which both used the green VW Beetles as their signature car when they started (and got into a spat about it), have gotten rid of almost all of them.

But Zipcar has shown, and Toronto Autoshare and even Mobility Carsharing Switzerland can confirm, there's a market for and good profit in having a few upscale cars in the fleet, as well. The Swiss call them "fashion" cars! Zipcar's pricing shows they command a premium - $16/hour on weekends for a Mini convertible or Volvo V50, compared to $14/hour on weekdays - in an admittedly "premium" city!

In an earlier post, I wrote about the major factor determining the monthly lease cost was the Residual Value. One good, quick source of information is Intellichoice's Top 10 Best in Class listings . So which vehicles hold their value best?

The Toyota Prius doesn't appear on this list because it's technically an "intermediate" sized vehicle. It does appear on the Intellichoice lowest depreciation list in that category - along with Honda Accord, Hyundai Sonata, Mazda 6, Nissan Altima, Suzuki Verona, Toyota Camry and VW Passat. It appears that some of models on this list have low depreciation not because they hold their value well but because the sale price was highly discounted to begin with. Either way, it may work to your advantage.

Many US carshares feature Toyota Matrix small station wagon, presumably because the residual values used in calculating leases for the Toyota are higher. But the Suzuki Aerio is another vehicle that the marketplace may not give full credit to. Toronto Autoshare has a substantial number of Suzuki Aerios and reports they are very popular with members. The Aerio costs significantly less than the Toyota Matrix, which it resembles, and has very good reliability ratings in Consumer Reports.

One of the real surprises recently in the automotive field has been the turn-around of Hyundai, which also owns Kia. After years as a low-cost, low-quality carmakers they've transformed themselves into a "Japanese-quality" car brand offering the best warranty in the industry. This year Hyundai dominates the Lowest Repair category and they're also starting to show up in the Intellichoice's Lowest Depreciation lists in their classes as well. As attractive in size and versatility the Kia Spectra 5 or Hyundai Elantra may be, its depreciation rates haven't caught up with apparent quality and so it still may not be an attractive choice for a car share.

So what's the answer - lots of variety or a few "tried and true" models? Take your pick - it defines the kind of carshare you are! But if you're going to do a variety of vehicles it helps to have a well-developed network of vehicles so members can enjoy the variety of cars you offer.
Posted by Dave at 4:11 PM