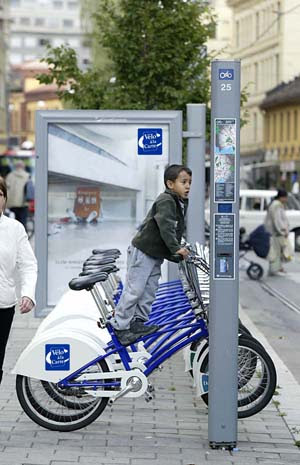 (Permit me to stray a little off the normal topic this time.)

I've been watching with interest the growth of public bike systems in major cities in Europe and soon in the US. There are about 20 cities in Europe with such systems. These "bike sharing" systems have a lot in common with carsharing and certainly must attract some of the same clientele. Anything that encourage alternative modes will help carsharing (and vice versa).

These systems are typically not primarily intended for tourist use but designed to increase the mode share of bicycles for inner city neighborhood trips. They typically use an interesting pricing structure: first 30 mins. (or hour) free, with additional time at 1€ per hour. 75% of trips in Rennes are under 1 hour. Overnight usage may have certain restrictions (to insure the bikes aren't lost or forgotten).

In each system the bikes are distinctive design to minimize the likelihood of theft. The stations are all electronically controlled and one can check availability over the internet or on some systems via mobile phone text message. One-way trips between stations accounted for 70% of the trips in Rennes, with usage monitored to insure bike supply and empty docking at the stations. Imagine the fleet manager's job at one of these systems!

All require "membership" registration and most involve some sort of chip card for identification and access to the bikes. They appear to avoid insurance issues since everyone is "covered" by national health insurance in these countries. Of course, no one wears helmets in Europe so they avoid the issue of having to put your heat in some else's funky helmet.

Here's a nice video showing the Bicing system in Barcelona.

There seem to be two types: municipally-sponsored ones like in Holland and Denmark, some of which have been around for many years; and ones that are operated by the two big international outdoor advertising companies - J.C. Decaux and ClearChannel/Adshel - which provide the systems, as well as other "street furniture" (bus shelters, benches, kiosks, pay toilets) in return for contracts to handle outdoor advertising (interesting revenue stream). The best known of these commercial systems are Velo V in Lyon, France (400,000 population, 3,000 bikes, 250 stations), Velo ala Carte in Rennes, France (200,000 population, 25 stations, 200 bikes) and starting July 15, the huge Vélib system in Paris (2.1 million, 10,000 bikes 750 stations). (A station in the ClearChannel's system in Oslo is shown in the picture above.)

In Germany, the national railway system sponsors a unique system in which the bikes can be locked up anywhere within the central part of town (not parked at designated stations). Each bike is equipped with an electronic locking system that is unlocked by entering a number gotten by calling the service (and giving them a credit card). At the end of the trip, the rider calls the service again and reports the location of the bike and gives the service the number shown on the lock to end billing. Rates are 8¢ per minute up to a maximum of $15/day. Call A Bike is offered in 5 cities in Germany. DB also sponsors carsharing with 1,600 autos in 90 city train stations and airports in Germany.

A good place to monitor developments in these public bike systems is a new Bike Sharing Blog put together by the grand daddy of "smart bikes" in the US, Paul DeMiao, a consultant and staffer with the Arlington County, Virginia, transportation department (which is already a big supporter of carsharing and now looking to 2 wheels sharing). He's got handy links to all the systems web sites. (And he picked the same layout for his blog as I did!)

And if you're really into public bikes, here's an excellent report on public bikes (PDF) from the European OSMOSE program that goes into detail about implementation and operation.
Posted by Dave at 5:20 PM