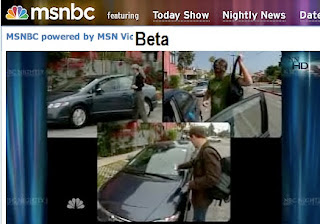 Last night NBC Nightly News presented a nice straightforward report on carsharing. The subject of the main interview, P. J. Palmer in Los Angeles claimed to save $6,000 last year by switching to carsharing. As one would expect, the report emphasized that members don't pay for gas, insurance or repairs.

The NBC report mentioned that carsharing was now available in more than 25 cities in the US, giving some basic membership and vehicle statistics, mentioning Los Angeles (hardly a carsharing mecca), Madison, Wisconsin (way to go Community Car) and citing Philadelphia's 10,000 members sharing 149 vehicles.

Dr. Susan Shaheen of U.C. Berkeley stated that there are now more than 135,000 carsharing members in the US.

NBC News reporter Peter Alexander said that carsharing was making some members "accidental environmentalists". He quoted the statistic that each carsharing vehicle takes 6 to 10 vehicles off the road. 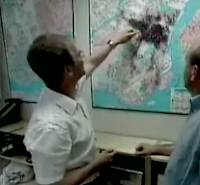 (Since I posted this, Kevin McLaughlin of Autoshare sent me a link to an excellent Canadian Broadcasting Corp. news story about carsharing in that country. It had a nice interview with Wilson Wood Vrtucar founder/owner and Benoit Robert of CommunAuto. The picture of CommunAuto's using a wall map with pins in it brought back memories. And it must be nice not to have to advertise Benoit!)
Posted by Dave at 9:30 AM