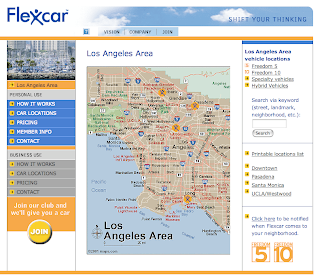 The blogosphere has been ranting about the recent drastic reductions in Zipcar fleets in Los Angeles (or this or this colorful posting) and San Diego. News reports indicate Flexcar had only attracted about 800 members between the two cities. From a high of about 40 cars in Los Angeles and about the same number San Diego (I'm guessing here), all that's left are cars under contract at several universities in both cities.

It's never easy to take something away from loyal customers, but what's also gotten the blogosphere worked up is how poorly Zipcar seemed to handle the transition. Judging from the comments, members and prospective members were being told up by customer service until the day before the axe fell that everything was fine. On very short notice reservations were cancelled and memberships were cancelled. I'm surprised, too, because my impression is that Zipcar is generally pretty good in managing this kind of thing. If it's any consolation, Flexcar handled things similarly when it shut down its ill-fated expedition in San Jose several years earlier.

Zipcar made the decision that Flexcar had been unable or unwilling to make for several years. The financial bleeding of keeping these two cities alive was costing Flexcar dearly, yet the hope that the regional and local governments would really get behind carsharing was always just around the corner. And Flexcar's feast-or-famine approach and staff turnover, didn't help either.

A little history: Once upon a time American Honda Motors invested in Flexcar. Their hope was to meet the California Air Resources Board (CARB) Zero Emission Vehicle (ZEV) mandate in a clever way. None of the auto manufacturers wanted to sell a pure electric vehicle, which is what CARB had in mind (see Who Killed the Electric Car for details), so Honda got CARB to agree that a hybrid car in a carsharing fleet would count the same as a ZEV. (Toyota supported ZEVNet at UC Irvine. Ford had its Th!nk cars and Chrysler bought the GEM Neighborhood Electric Vehicle company and gave away NEVs claiming it should count the same as regular street legal car.) With that option, Honda needed a couple of hundred cars in Calfornia each year.

And it's worth remembering that at the time there were prospects for several million dollars of seed money from the California state legislature to encourage local governments to form partnerships with carsharing companies - so the stars certainly looked like they were lining up for carsharing.

San Francisco was the logical place for Flexcar to start but with City Carshare rates so low, Flexcar was afraid to tackle them head on so they came up their disastrous "pincher" strategy and launched Flexcar San Jose. Except for a diversion to Palo Alto, never got any further up the Penninsula. Given their size Los Angeles and San Diego were the other logical cities to start carsarhing. (Regrettably, Flexcar never got anything going in Sacramento, a city that was begging them to come, and one that they could have made a small but decent showing in.)

Los Angeles was the first city in southern California to be established. These were heady days for Flexcar when they seemed to think they could throw a lot of money anywhere and carsharing would stick. So, they started big - big in area, at least - with vehicles scattered (very thinly) all the way from Long Beach to Pasadena - more than 25 miles apart.

One of Flexcar's on-going problems always was follow-through - making promises it couldn't fulfill. LA was as good an example as anywhere. Another aspect of Flexcar in its heyday was that budgets alternated between feast or famine depending where they were in raising the next round of capital. So, things got launched with high hopes and then would suddenly get put on maintenance mode for 6-9 months until the next round of financing came through. But due to staff turnover the priorities in LA changed - from the initial we can blanket the area by starting with a few cars in a widespread area; to concentrating on downtown (but never quite shutting down the other areas) and finally concentrating on university fleets but never marketing to the surrounding neighborhoods. Now the universities are just about the only place where carsharing is left.

San Diego was the same story in a different setting. (Disclosure: one of my jobs for Flexcar was to set up the San Diego market, and I must admit I have a soft spot for San Diego - it's got real neighborhoods that you can actually walk in, a pretty vibrant and revitalizing downtown, light rail, heavy rail and pretty good bus service, as well as a forward looking regional planning organization, SANDAG.) But the same problems with funding and priorities prevented the orderly development in San Diego as well.

But the local governments in both Los Angeles and San Diego never seemed to "get" carsharing either, so a lot of their cooperation and support never seemed to get outside of the meeting rooms.

So is southern California the achilles heel of carsharing - proof that carsharing will never work there? I don't think so. Mostly I think it's a textbook example of how not to do things - in contrast to Zipcar's "eyes on the prize" style of doing business - concentrating on fewer cities and greater emphasis on direct contact with prospective customers. That said, neither city is your typical densely populated, parking congested, urban mecca, so some adjustments to the classic carsharing model are warranted.

The next operator to tackle carsharing in these cities needs to put a greater emphasis on partnerships with governments and major employers. And they probably need to adjust the fleet for the demographics of the area - a Honda Civic is not the one-size-fits-all vehicle for this marketplace. But this is just a start of the things to do differently next time - and should be a next time.
Posted by Dave at 2:05 PM