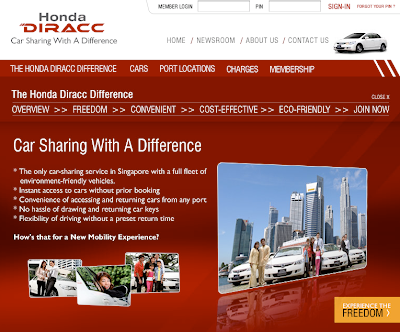 The most innovative carsharing service in the world is calling it quits after 6 years, according to the Straits Times in Singapore. Honda's DIRACC (direct access) offered one way trips between any of 21 ports (pods) with no reservation required and no return time needing to be specified. Recent reports say the service had 2,500 members with access to 100 vehicles. Singapore has a population of about 4.5 million people.

"'As membership grew... we couldn't maintain the service quality which we set initially, " said Managing Director Toshio Iwamoto in an interview with the Straits Times. "Everybody expected cars to be available. But in reality, we could not guarantee. There would sometimes be hiccups, and dissatisfaction and complaints from members would arise.''

Owning a car in Singapore is very expensive, partly due to the cost of government "certificates of entitlements" (COE) for buying a car. The certificates are obtained through an unusual bidding process in several categories, including transferrable or non-transferable certificates, so the cost fluctuates. Recently, these COEs cost about $12,000 SG ($8,600 US) on cars that range in prices from $30,000 SG ($21,000 US) for a minicar to $50,000 ($36,000 US) for a compact, like the Honda Civics in the DIRACC fleet. IN 2005 the cost of COEs went down and carsharing companies reported slower membership growth. Apparently, since then the cost of COEs has gone back up. Singapore requires that after 10 years cars must be exported or scrapped, creating an on-going demand for new vehicles.

The Honda Civic Hybrids in the DIRACC fleet were equipped with a touch screen that provided the interface for the on-board computer, as well as navigation and real time traffic information. One industry observer who has visited the scheme said half-jokingly that the on-board computers that Honda developed for the service cost as much as the vehicles themselves. DIRACC was using a second-generation computer developed by Singapore firm NCS (link to PDF here) that was put into service in October 2006.

Last year another traditional carsharing company, CitySpeed, also closed. The 2,500 members having to choose between the grand-daddy of Singapore carsharing NTUC's Income Car Coop, which started in Aug. 1997 and now has about 5,000 members and WhizzCar http://www.whizzcar.com/ operated by Popular Rent A Car ("Be a Whizzer") with about 2,500 members. NTUC Income, WhizzCar and Honda DIRACC allowed cross use by members. The Honda distributor for Singapore was quoted as indicating possible interest in continuing with some sort of more traditional carsharing service in Singapore.

Honda started the DIRACC service in 2002 with 50 members sharing 15 vehicles at 3 ports. At the time it used the local cab company for operational support and had partnerships with a major housing developer and car park operator in Singapore. The Honda DIRACC service was part of Honda's Intelligent Community Vehicle System project (ICVS), which has included a public bicycle program with electric bikes in Japan, the Intellishare program at the University of California at Riverside campus, as well as the CarLink project in the Bay Area. Press reports stated that Honda Motor Co. did not rule out opening other ICVS services in other cities in the future.
Posted by Dave at 10:34 AM