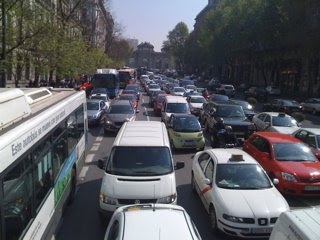 I was honored to be invited as one of several outside speakers at a one-day workshop to promote the growth of carsharing in Spain held recently in Madrid. The more than 60 people who attended came from a wide range of backgrounds — including Spain's only existing carsharing company, Avancar, various government agencies and several start ups in various stages.

Madrid is a city with many beautiful boulevards, as well as neighborhoods with narrow streets and wonderful surprises everywhere. As you can see, it also has it's share of traffic problems. And we were told that the Spanish may have a fascination for cars, and car ownership, approaching that of the USA.

The day began with a wonderful reminder of the connection between land use and transportation from Michael Glotz Richter and a humorous introduction James Bond in Bremen carsharing video.

Conrad Wagner continued with a reminder of Traffic... Mobility... Access... that carsharing is one of many options of mobility management and reviewed how Mobility Switzerland had grown nationally and now was able to provide service in many smaller communities, including the partnership with the Swiss postal service.

In my presentation I described the way in which Zipcar, and previously Flexcar, had set a new standard for marketing and defining the carsharing service in terms of a lifestyle choice and not merely as functional transportation option. 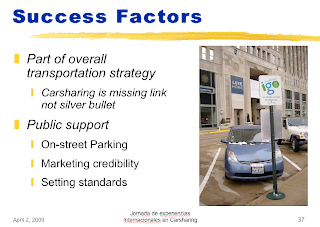 I emphasized the importance of partnerships with local government and transit agencies, that competition between two carsharing providers was okay and that companies and the government need to think big (the lesson of Velib). I encourage the Spanish government to create national network by setting standards, supporting local providers, providing carsharing options for smaller cities, integrate carsharing with transit & rail

Local perspective came from several speakers including a perspective on the energy saving potential of carsharing, on customer surveys and possibilities of carsharing in the Basque country. Valuable perspective was provided by speakers from Avancar in Barcelona (formerly Catalunya Carsharing), including Pau Noy, one of the founders of Avancar and operational experience from Dirk Bogaert of Avancar, which included a demonstration of the Convadis access system on one of their hybrid Honda Civics so people could get a better feel for the technology. 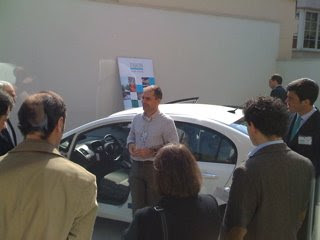 The final roundtable discussion included a number of questions about marketing, changing peoples habits and about parking - on street, naturally.

The workshop was very well organized by Enrique Huertas and staff of the transportation consultancy Colin Buchanan in Madrid. We hope that they are successful in helping local governments understand the importance of carsharing and that entrepreneurs are able to get support to launch carsharing all over Spain. 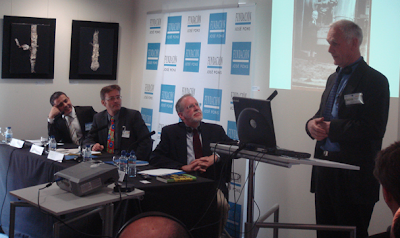 Here's a description of the workshop in Spanish ( or a machine translation in English) with links to all the speaker's presentations.And if nothing else, here's a link to my presentation (3.8 mb).
Posted by Dave at 12:44 PM