Sharing and Openness - Robin Chase Thinks About the Future of Transportation

Recently I attended a very interesting talk by one of the founders of Zipcar, Robin Chase, that she gave in Portland during a west coast visit. Her topic was, "How Sharing and Openness Should Play a Critical Role in Our Transportation Future" and it provides a nice framework to think about carsharing and related transportation sharing activities and businesses.

If the topic sounds a little abstract, it was, but only a little. In fact, it's a fundamental concept that we need to get a hold of. In her talk Robin makes the point that we've taken individual consumption of "stuff", including cars, about as far as we can, so it's time to start thinking about these issues in a new way. Her idea is that "collaborative consumption" (sharing) and "collaborative production" (carsharing companies, for example) are an important path to an environmentally-friendly future.

She reminds us that we are rapidly running out of time to address climate change and that each year fail to start seriously addressing it, the chances of avoiding catastrophic outcomes increase significantly. In one of slides I found most meaningful, Robin points out that it will be technology in the service of facilitating behavioral changes that have the capability of making significant cuts in our CO2 from transportation fast - within the next 5 years - and that any impact from electric cars and cellulosic ethanol is many more years further out. 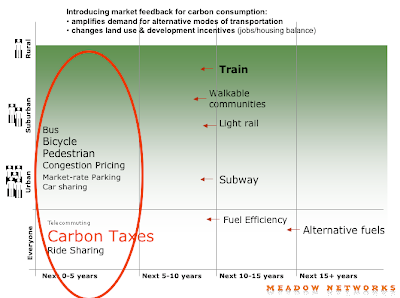 We have a long history of having technology solve our problems and in the long run, it will. But it won't be alt fuels or EVs by themselves, but a real rethinking of our transportation system. (Which in the US, isn't really a system at all - but a car network.)

I know this idea has been pondered by many in the carsharing world but one question I keep coming back to is the idea that there must be some sort of transportation analogue to Google's "open" approach to providing services. Robin's take on this question has to do with open "platforms", as she calls them. She discusses this concept in more detail in this National Journal blog.

Robin has talked quite a bit about this on her blog - Network Musings - which is well worth visiting regularly.

A few days after her talk in Portland she gave a talk covering some of the same topics at the annual meeting of the Association of College & Research Libraries national conference in Seattle. They recorded a nice 20 minute conversation with her that is well worth your time to listen to. Libraries are perhaps the best example of a public "platform" for "collaborative consumption" (to use Robin's terms) .

You can watch Robin's entire talk by in Portland following the link from here. (Be patient the Portland State University system takes a while to get going and the picture quality is marginal.)

Her visit was the first time that Robin and I have met, having started carsharing companies on opposite sides of the country many years ago - and at the time, for me at least, never having thought about them in such a philosophical light. Thanks, Robin, for these wonderful ideas and for permission to post these 2 slides from your talk. Some other slides are included on her musing on the topic.
Posted by Dave at 12:14 PM