I took a short test drive in a Nissan Leaf yesterday at SolarWorld offices near Portland and will share some impressions.  To give you a sense of it here's a short video on our test drive.  We got up to 40 mph. on this street.  (That's my wife driving and the Nissan handler talking.)  As you can hear, it's very quiet.
Nissan has done a very nice job on the exterior - it's a lot fresher looking than a Versa, and, for better or worse, not as distinctive as the Prius (perhaps to appeal to the Civic Hybrid mentality?)  Car designer and friend Jose Paris in his itMoves blog had a stronger reaction to the Leaf than I do.  (His blog is well-worth following for his thoughtful and progressive comments on lot's of things automotive.)
I was very impressed with how comfortable and familiar it seemed inside.  It has a similar interior feel to a Prius (which I own).  Although the Leaf is a lot smaller than our Prius it doesn't feel cramped (including the back seat (at least with 1 or 2 people in back).  I thought the performance was amazing - very peppy acceleration (the Nissan handler in the car with us said it would do 0-60 in 10 sec.)  With a quoted 90 mph top speed certainly seems like it would be a comfortable car for freeway driving.  However, the published 100 mile range would be at more moderate speeds!  There's a good amount of room behind the 60-40 split rear seats, which fold down. 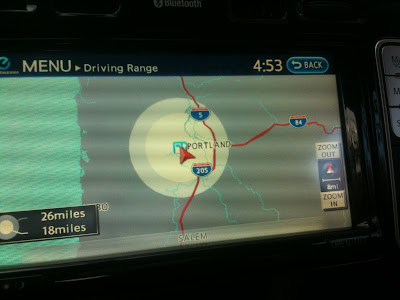 Nissan does a good job of addressing the "range anxiety" question - using the nav system map to display circles from your current location showing you available range based on your current battery charge, as well as the map displaying the location of EV charging stations.  (They also claim they'll have roadside assistance providers to give you a boost or a tow if you run out of juice.)

Overall, Nissan has done a great job of putting enough technology on display to appeal to Prius owner and techy types) - a very similar dashboard layout, a navigation system, and even a backup camera.  If has full heater and air conditioning, radio (including optional XM button) etc.
The whole test drive experience was an up-scale production - including a mandatory warm up pitch to wow you with the technology, sell you on electric drive and compare the cost of fuel — electricity in our area is 10¢/kWh and Nissan claimed it would still be cheaper to operate than gas at $1.10/gal. (Presumably this will change somewhat when the equivalent of gas taxes are applied to the electricity for recharge; which will presumably will be facilitated since utilities are creating special low(er) tariff rates for off-peak recharging.) 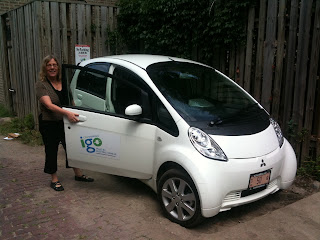 This summer I was also impressed (as a passenger) in an equally short (around a couple of blocks) trip in a Mitsubishi iMiev that Sharon Feigon of I-Go Carsharing had on loan.  Also very quiet and much cuter than a Leaf.  The model I rode in was a right hand drive prototype from Japan so it's hard to judge what the interior will be like when they're sold in the US.  The other prospective highway-rated EV out there is the Smart Electric Drive, likely to cost far more than either the Leaf or iMiev but presumably would offer at least some vestige of the Daimler panache.

At this stage, the primary thing that tempers my enthusiasm about EVs right now is that in most parts of the country EVs will make a the relatively low contribution to greenhouse gas reduction.  The problem is so much of our electricity comes from coal-fired electric generation (which we hope will change over time).
So does a Nissan Leaf make sense for carsharing?  Definitely - especially if someone else is paying for the charging stations.  Either the Leaf or iMiev would be an excellent specialty vehicle and should be a good marketing tool for the carsharing company.  Yes, there will be some management issues as customers get used to driving EVs, but they will quickly pass.  (I remember talking with a number of CarSharing Portland driving our Honda Insight (the original one, not the current one) who didn't understand the engine autostop feature and called on their cell phone when the engine stopped at a stop light!)

Given the government money flowing on both sides of the North American border to promote EVs, it's no surprise that a number of carshares will be adding EVs as soon as they're available.  I-Go will get some of the first production iMievs, City Carshare is getting a $2.4 million grant to add 12 Nissan Leafs, 12 Prius Plug In Hybrids and 5 Neighborhood Electric Vehicles (NEVs) along with 24 charging stations. Hertz Connect has announced they will be getting some of the Leafs in the Hertz allocation, as well.  CommunAuto in Montreal has announced they'll be adding 50 Leafs (Leaves?) to their fleet - with 18 stations already on the map.  (Since Hydro Quebec provides such a large part of Montreal's electricity, CommunAuto customers really will be doing their part to reduce GHGs for the planet.)  Hopefully car2go will get some Smart Electric Drives to round out the picture.

Meanwhile there's Altcar the so-called carsharing scheme started in Baltimore last year by Canadian EV manunfacturer Electrovaya renting vehicles the Maryland Science Center (I say it's "so-called carsharing" because after over a year they've still got only 1 station - perhaps that will change?)  In Europe, what may be the under-reported carsharing news of last year, newly revived EV manufacturer Th!nk created an all-electric carshares in Copenhagen, Gothenberg and Oslo called Move About and the Oslo branch recently reported they had signed up their 1,000th member.  Last year Better Place (battery swap company) partnered with the Danish Railways to provide EV carsharing at sevveral stations (but otherwise continues to avow they're not interested in carsharing). And, of course, when it finally launches, the "grand Pere" of them all will be the Autolib service in Paris.
Posted by Dave at 3:09 PM