Kevin McLaughlin of Autoshare, and a very astute observer of the industry, has posted his top 10 carsharing stories of 2010 on carsharing.net.   So, with the year end rapidly approaching I wanted to organize my thoughts about carsharing during the year gone by and my reading of the tea leaves for 2011.

Without a doubt the big news of the year was Zipcar taking the first step in its Initial Public Offering (IPO), filing its intent with the US Securities and Exchange Commission.  Scattered throughout the hundreds of pages of the initial filing, and now several quarterly filings since, is a revealing look behind the curtain of corporate carsharing - the financial situation and all sorts of numbers to ponder - vehicles, members, various markets, and profitability. 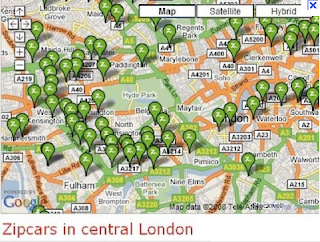 The other big Zipcar news was the proposed merger with their biggest competitor in the United Kingdom Streetcar.  Followed by the surprise delay while the UK Competition Commission sought testimony and reviewed the evidence.  Responses, filed by a variety of parties, also pull the curtain back a little bit on UK carsharing - Greenwheel's intention to enter the London market, as well as the benefits and drawbacks to local governments of competition in the carsharing (car club) marketplace, among other things.  In the end the commission has blessed the Zipcar-Streetcar merger. Hopefully, Zipcar will continue the successful aspects of Streetcar's operation at least in the UK.
And, finally, Zipcar gave observers a year-end surprise again announcing a $21 million round of investment by two US venture capital firms.  With additional funding it appears they will consumate their investment in Avancar in Barcelona before the end of the year.  And, like the merger with Streetcar, this round of financing appears to set up a hoped-for stock price of the initial offering.
So what's in the cards for Zipcar for 2011?  My guess is that the IPO will finally happen, and if the recent addition of 10 vehicles in Hollywood, Calif. (bringing the LA total to 75) as well as adding more vehicles in most other markets (now over 7,000 vehicles) means that Zipcar is ready to get back in the urban carsharing business after several years of belt tightening and concentrating on sweetheart deals on college campuses (now on over 200 campuses).   Zipcar will certainly continue to be a contender in most North American markets and, its excellent branding and marketing and ability to avoid getting distracted by side deals and ideas should serve it well.
Peer to Peer Carsharing 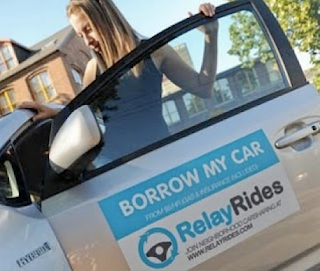 The other big development for 2010 is the launch of a pilot in Cambridge, Mass. by start up RelayRides.  Although many in the industry have talked about it, RelayRides CEO and founder Shelby Clark persevered to obtain the first P2P carsharing insurance in North America.  And, after almost launching in Baltimore, RelayRides realized that the best place to demonstrate the feasibility of P2P CS was in an area of successful traditional fleet-based carsharing and decided to launch in backyard of Zipcar - Cambridge, Mass.  The pilot test quickly put to rest any doubts that car owners would want earn a little money from their vehicles, and, of course, had no trouble showing that carsharing members were happy to pay $2 per hour less than the competition.
By year's end RelayRides had announced it's first full-scale city launch on the other side of the continent and in San Francisco, the backyard of other P2P carsharing start ups Spride and GetAround.  And Shelby and crew also finally made the internet connection that has eluded other carshares with a major investment by Google Ventures.
Meanwhile Spride (in partnership with City Carshare) and GetAround both launched their own pilot projects in anticipation of the passage of AB1871, which defined "personal vehicle" carsharing for legal purposes.  The bill makes some important distinctions - when is private vehcile in "carsharing" service, required levels of insurance and specifies that the vehicle owner cannot make more money from sharing than they have in actual expenses.   As yet to be defined is the local, state and federal tax implications for vehicle owners - particularly, if local governments will require vehicle owner's have to get a business license for P2P carsharing?
For 2011 I think we can look forward to seeing a serious evolution in carsharing in-vehicle technology motivated by the P2P market, and, when that happens, the start of a major expansion of carsharing into much larger areas of cities (and even new cities) that previously could not viably be served by carsharing.  Also on the horizon is P2P car rental, basically a web site/service providing link up between owners and renters but providing only the traditional minimum level of insurance that distinguishes car rental from (most) carsharing services.  Right now JollyWheels is the best example of P2P car rental, operating in six US cities.  In the UK, Whipcar is the prime example.  (An unsuccessful effort in LA closed down during 2010.)
Car2Go 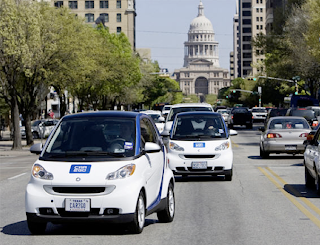 Meanwhile, down in Austin, Texas, Daimler's innovative demonstration of on-demand, open-ended, one-way carsharing passed the 10,000 member milestone in Austin in November, following the opening up of the project to general public in the spring.  Car2Go claimed 80,000 trips and appears to be doing sufficiently well with their "personal public transportation" model that they expanded the "geofence" area in Austin where trips could be ended.  The no-cost deal with City of Austin provides free use of car2go for city employees in return for free parking in any legal parking space.
Daimler announced the next city to get the car2go service would be Hamburg, Germany, operated in partnership with EuropeCar, a possible model for the future expansions.  And rumors persist that Vancouver, BC is also on Daimler's radar.   The German manufacturer also showed a special car2go version of their iconic Smart car at the Paris autoshow that will include a solar panel on the roof, improved integration of carsharing technology with the navigation system.
Connect By Hertz
Meanwhile, Connect by Hertz quietly expanded opening up several more world capitals - Berlin, Madrid, joining Paris and London.  And, taking advantage of an opportunity, jumped down under to acquire 5-year old Flexicar, the smallest of Australia's 3 carsharing companies - with 90 vehicles in Melbourne and Sydeny.
But the bulk of the expansion was responding to RFPs from various college and universities, in many cases competing with Zipcar and Enterprise WeCar for the honors.  Earlier requirements for "guaranteed revenue" contracts were largely abandoned, not only because of competition but also because of greater confidence in what it takes to keep college/university cars busy.   Connect is now on more than 40 campuses in the US and Canada.
Battery electric vehicles were very much in the news in 2010 and Connect By Hertz appears to used it's "connections" with partent company Hertz to put them into service in New York City starting Dec. 15.  EVs in Washington, DC and San Francisco to follow next year, suggesting an expansion in these markets.  Plug In hybrids are already part of the fleets of several carshares HourCar in Minneapolis, Autoshare, Toronto and City Carshare, San Francisco and Zipcar.  (Arguably, this was only the latest round of EVs in carsharing fleets - earlier efforts involved Th!nk EVs by City Carshare in San Francisco and Flexcar in Long Beach, through their association with the Bike Station there.)

In a little noticed move, taking advantage of their Eileo in-vehicle technology, Connect quietly unveiled one-way service in their New York market.  It's a specialized one way service that sure to attract to new members - one way trips to all 3 New York City airports!  Right now cars can only be picked up from a single location in Manhattan (the Hertz rental location at 126 W. 55th).  At $10 per hour to drive to/from the airport, this seems likely to be a huge win for Hertz.  But late flights and traffic jams could really spoil the party.
Other Developments in 2010
In Paris, the ground-breaking city-wide Autolib project moved another step closer to reality with the award of the contract to dark-horse proposal by French start up electric vehicle manufacture, Bolloré.  The company was chosen by the Autolib partnership over several other proposals by consortia of major French companies.  When operational Autolib will allow one-way (or round) trips by 3,000 battery electric vehicles between 1,200 recharging stations in Paris and surrounding communities.  The implications of this service could be the tipping point that will finally bring on a "mobility on demand" lifestyle.
In Janauary, consulting firm Frost and Sullivan got industry juices flowing with visions of the possibility of millions of carsharing members - 4.4. million in Europe and US - a long way from the current 388,000 members sharing 7,600 vehicles at the beginning of 2010.   Assuming a growth 50% growth rate to derive the 4.4 million-member number that seemed rather far fetched to me at the time.  But the possible explosion of P2P carsharing now makes that seem more possible.  Still it will take some major shifts in government policy to “mainstream” carsharing, and those might be happening.
Finally, an event in 2010 that may have major implications for carsharing, and all transportation policy, is the decision by the Obama administration that the Environmental Protection Agency to move forward with regulating GHG by rule rather than waiting for a grand consensus.  But so much is still contingent on digging out of the economic recession, particularly in face of Republican plans to drive the country into bankruptcy so that rich people can have tax cuts.
Happy new year.
Posted by Dave at 8:37 AM