CAR2GO Is On a Roll 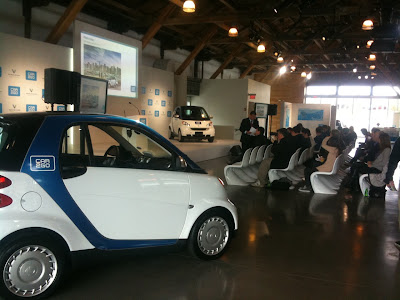 I was fortunate to be able to attend the press conference announcing the launch of car2go in Vancouver this June.  As you would expect, it was an impressive and well-staged event.   Mayor Gregor Robertson was most enthusiastic and car2go CEO Nicholas Cole was able to work in some "Go Canucks" to take advantage of the hockey fever sweeping Canada right now.


(It didn't hurt that Vancouver's "liquid sunshine" let up for the morning, and don't ask me why, but just seeing a Smart car makes me smile.  So having several of them sitting around in their special white with blue car2go trim is a good sign.)

The plans car2go has for Vancouver are impressive - starting out with 225 Smarts (the new special car2go model), floating parking + designated on-street stations in certain areas; a large floating parking zone (18 sq. miles or 47 sq. km) and rates same as Austin - 35¢ per minute; $13 per hour or $66 per day and 45¢ per kilometer for trips over 200 per day.
Vancouver follows on the earlier announcement of car2go in Hamburg and recent announcement of a fleet of electric car2go Smarts coming to Amsterdam.   And it appears that several more cities will be announced this year, as well.
Car2go joins Modo Car Coop (the very impressively rebranded Cooperative Auto Network) and Zipcar (offering premium service) in the traditional "round-trip" carsharing by the hour.  Meanwhile, on the launch day the Twitter-sphere had a flurry of Tweet and counter-Tweet about car2go.  The Modo loyalists were sticking up for the home-town company but, perhaps not surprisingly, the coolness factor of one-way seemed to dominate the conversation.  Zipcar was silent the whole time.
I've noted before that Daimler has used the phrase "personal public transportation" to describe car2go.  Given the unique aspects of the Smart car, it's an apt phrase.  Certainly there will be many people who will maintain memberships in both services - especially given car2go's willingness to give them away at first - using Modo for longer trips and when more people or stuff needs to be carried.  35¢ a minute adds up and $13 per hour if you're traveling outside of the zone makes it somewhat of a lifestyle statement.  (If you're traveling within the floating parking zone I think there's little reason not to end your trip when shopping or going to a meeting - if you're downtown and "your" vehicle is taken, there are almost certainly going to be others available nearby (you do have an iPhone, don't you?) and if you're in the outskirts of the zone, then the likelihood that someone will take the vehicle is very low - except if you've parked near a rail station.)
So perhaps we'll have an interesting test of the competition of "mobility on demand" model versus the classic carsharing as an "alternative to car ownership" service.  (I don't think the demise of Austin Carsharing last year says as much about possible competition between the two services as it does about the viability of Austin Carshare.)
But the real test will be how Zipcar responds to this additional pressure.  They've been struggling to get traction ever since coming to Vancouver — the price differential compared to Modo for similar vehicles is significant.  Modo's rates are highly affordable $3 per hour + 40¢ for the first kilometers (declining to 15¢ per km for longer distances) or $33 per day.  Zipcar is $11/hour gas included or $75/day.  But I wouldn't underestimate Zip, especially after their recently completed IPO.

For me, the big unanswered question right now is about the transportation impacts of any "mobility on demand" service.  I certainly expect that a small percentage of walking, cycling and public transport trips will be shifted to the Smart cars.  But this is probably analogous to the increased VMT from non-car owning members after they join carsharing.  And I'm told that an evaluation by the University in Ulm is forthcoming. 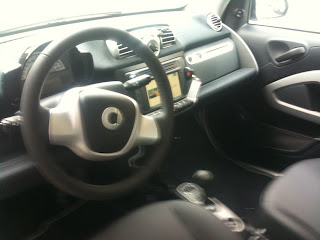 It's worth noting that Car2go has set up a nice retail shop in Gastown and I expect they will do good business in walk-in memberships and customer relations.  (I've been very impressed by the activity I consistently see in the Zipcar store in downtown Portland.)  Something else that car2go has done right (at least I'm aware of it in Austin) is becoming part of the community - no small feat for corporate carsharing - they seem to be at or associated with many events in Austin - an event-ful town!  So, we'll see if they can replicate that engagement in VanCity.
Finally, this trip provided my first look at new Smart with the new (proprietary) telematics system with a very handy ignition key and card holder right in the unit (see picture) and integral navigation system (bravo Daimler telematics people).  Plus the vehicles have a solar roof - cool, eh?  (But what is a solar roof on gasoline car all about, anyway? See comment below for the answer. - DB)
As always, getting into a Smart is an exercise in cognitive dissonance - it appears so tiny on the outside and yet feels so unexpectedly roomy on the inside.  The best thing about this new Smart is that Daimler seems to have finally overcome the jerky, uncertain autoshifting that I have found so disconcerting in the previous Smarts.

Car2go seems to be off to a good start in Vancouver.
Posted by Dave at 9:18 AM